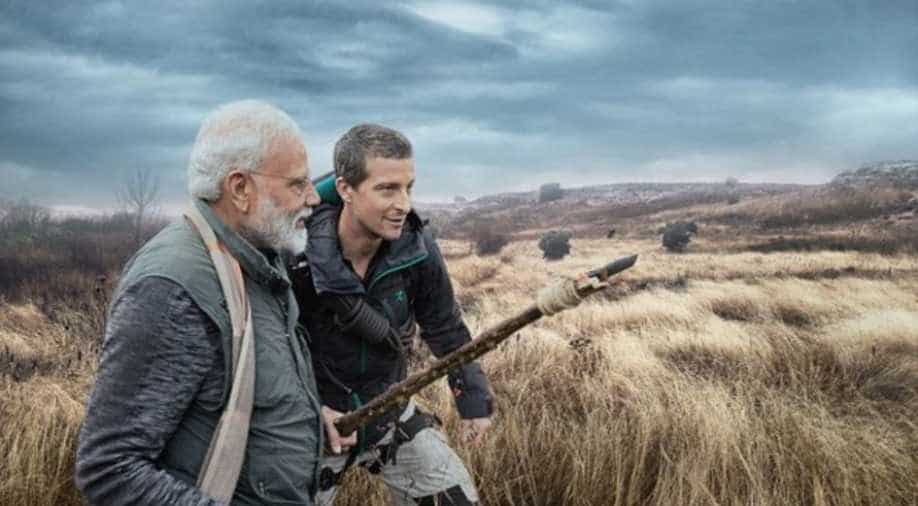 PM Modi with Bear Grylls in a still from Man Versus Wild episode. Photograph:( ANI )

There was much speculation as to how PM Modi managed to communicate with Grylls in Hindi while the TV personality responded adequately.

Prime Minister Narendra Modi on Sunday revealed how he managed to communicate with Bear Grylls, a British adventurer on latter's show 'Man vs Wild' in Hindi.

There was much speculation as to how Modi managed to communicate with Grylls in Hindi while the TV personality responded adequately.

The Discovery Channel programme saw Modi, walking through the wild at the Jim Corbett National Park in Uttarakhand.

"Some people ask me one thing, 'Modi ji, you were speaking in Hindi and Bear Grylls does not know Hindi, so how did you carry on such a fast conversation between the two of you?'" PM Modi said.

People were also curious to know if their conversation was edited and how many times they had to shoot, he said.

"The reality is that technology was used extensively in my conversation with Bear Grylls. Whenever I spoke, immediately there was a simultaneous translation into English or simultaneous interpretation in his ear. So I used to speak in Hindi, but he heard in English and because of that the communication became very easy and this is an amazing aspect of technology," PM Modi said during his monthly "Mann Ki Baat" programme.

The Prime Minister stressed that a lot of people wanted to know about the "Man vs Wild" episode broadcast on Discovery.

"So, when I was thinking of "Mann Ki Baat", I knew that there will be a lot of questions regarding my appearance in the show."

PM Modi also said that this one episode of Man vs Wild helped him reach out to a massive number of young people across the globe who follow the programme.

The TV episode featuring PM Modi was aired on August 12 and has been viewed by a record number of audiences.