'My upbringing does not allow me to take a life': PM Narendra Modi to Bear Grylls on fighting a tiger 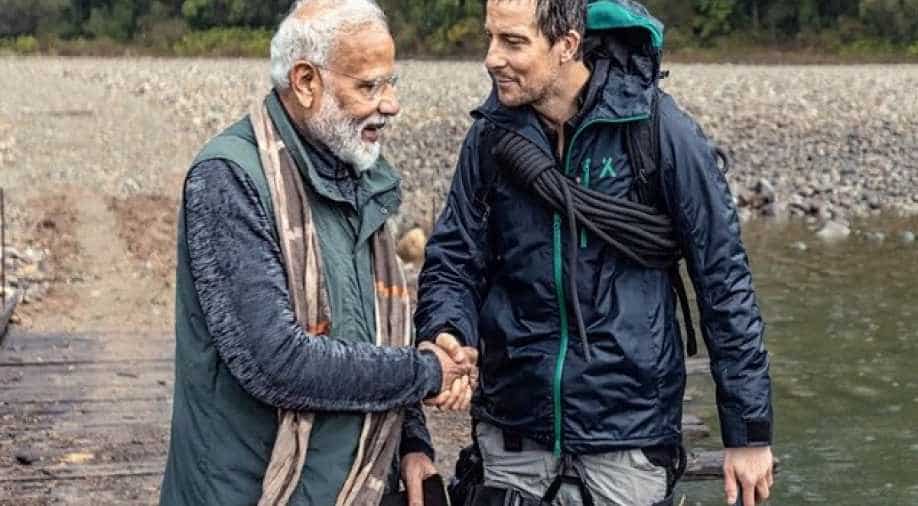 Recalling one of the moments experienced with Prime Minister Narendra Modi while filming an episode of the wilderness survival television series 'Man Vs Wild'.

Recalling one of the moments experienced with Prime Minister Narendra Modi while filming an episode of the wilderness survival television series 'Man Vs Wild', adventurer Edward Michael Grylls, popularly known as Bear Grylls, praised Modi's thought of not to harm any animals as his 'upbringing does not allow me to take a life'.

Ever since the promos of Discovery's exclusive show featuring Modi and adventure junkie Grylls riding through the wilderness of Uttarakhand went viral, the special edition has been highly anticipated. In a four minutes promo video, Grylls, was seen teaching Modi how to make a spear that he can use to protect himself in case they encounter a tiger in the woods.

"You are the most important man in India and my job is to keep you alive. If a tiger comes, so this is your protection," Grylls said while teaching Modi how to use a spear as a safeguard against potential attack from a tiger. To which, the Prime Minister replies, "My upbringing does not allow me to take a life. However, I will hold on it (the spear) since you insist!".

Meanwhile, in an exclusive interview to ANI, Grylls was asked whether the audience will get to see him and Prime Minister eating any unpalatable food in their survival quests as the show which goes by name Man Vs Wild is known for it.

To this Grylls refuted the possibility by saying that the 'Prime Minister is vegetarian'.

"Prime Minister is a vegetarian, so there was going to be no eating of grubs or anything like that. But in the wild, you can survive very well off berries, roots, plants and certainly, Prime Minister spent his younger years in the wild, so he was very comfortable with that. We ended up very cold and very wet but shared some beautiful Indian tea together in the end; that was a very special moment for me," the adventurer shared.

Modi also stressed on important issues like the need to preserve and embrace nature. Responding to Grylls, when he pointed out evident dangers lurking in their vicinity (on account of wild animals), Modi fearlessly said, "We should not take this place as a danger zone. When we go against nature then everything becomes dangerous; human beings to become dangerous. On the other hand, if we co-operate with nature, then she also co-operates with us.

In a first, Modi will feature in Discovery Channel's show 'Man Vs Wild' alongside Grylls.

Shot in Jim Corbett National Park, the special episode will be broadcast on August 12 at 9 pm and will be showcased in 180 countries around the world. Elated about the association, the Prime Minister had earlier said he was both intrigued and inclined to take part in the show.

"For years, I have lived among nature, in the mountains and the forests. These years have a lasting impact on my life. So when I was asked about a special programme focusing on life beyond politics and that too amid nature I was both intrigued and inclined to take part in it," Modi had said.

The show will be a frank and freewheeling journey that will throw light on wildlife conservation, highlighting issues related to environmental change.

The Prime Minister said he took this as an opportunity to showcase India's rich flora and fauna and to emphasise on environmental conservation.

Modi and host Grylls will also be seen building a raft to cross a jungle river together in the episode.