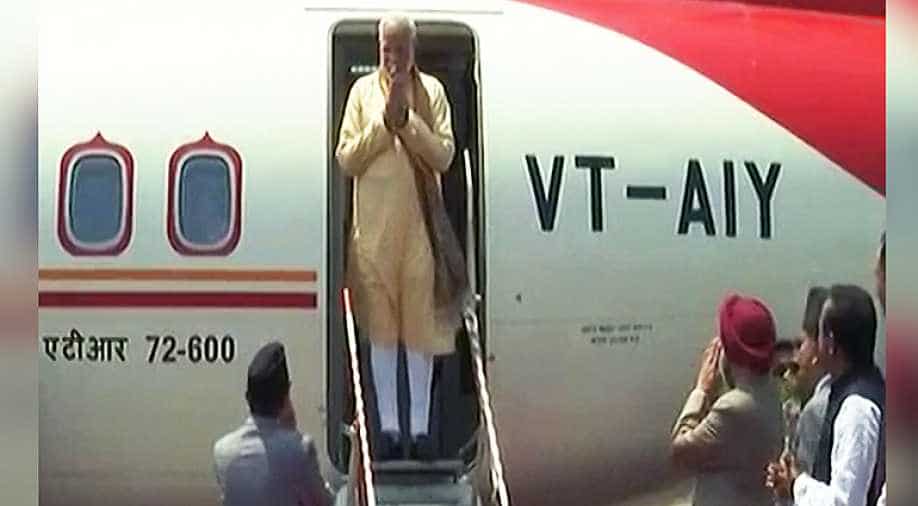 Later on Tuesday, the prime minister will address another public gathering in Chikkodi at 6pm.

12: 52 pm: Before questioning us Rahul Gandhi should know that in 2005 Manmohan Singh had said that all villages will be electrified by 2009, and the same thing was said by Sonia Gandhi ji and you(Rahul ) mock the labourers  and workers who made this (electrification) possible: PM Modi

12: 50 pm: On Lokayukta, the PM said: "In Karnataka, there is no law and order. The Lokayukta is not safe, how can the common people be safe."

12: 49 pm: "If CM has a 2+1 formula then ministers have 1+1 formula. Relatives of ministers are fighting polls. This is hurting the workers of the Congress, the PM said.

12:48 pm: Vote for BJP is a vote for vikas (development), he said in his closing remarks.

12:47 pm: Why is there no proper access to safe drinking water in Karnataka: Modi

12:45 pm: Only NDA is working for the benefit of farmers, he declared.

12:44 pm: Whenever there is Congress, there is corruption, he said.

12:38 pm: Congress is naamdaar (those who pretend to work), BJP is kaamdaar(doer), Modi said, adding, family politics will not work.

12:32 pm: Rahul can't even pronounce the names of his party leaders, the prime minister said.

12:27 pm: Can Rahul Gandhi even speak for 15 minutes on Karnataka's development without reading from any piece of paper, PM Modi said while taking a dig at Congress vice-president.

You can speak in Hindi, English or your mother tongue, he added.

12:20 pm: Taking a dig at the Congress government, the prime asked: Why are 4 crore people without electricity in the state? Want electricity in every household, he declared.

12:12 pm: In his first election rally in Karnataka, PM Modi said not a wave but a BJP storm will hit Karnataka

12:13pm: Sitting with the next BJP chief minister(Yeddyurappa who is present at the poll rally)

This is PM Modi's first rally in Karnataka ever since the polls were announced two months ago. The Prime Minister will address a string of rallies in Karnataka over the next five days including three today in Mysuru, Udupi and Belagavi.

His next stop today will be at Udupi at 3pm where he will visit Krishna Mutt and take blessings of the Pejawar seer before addressing a public rally at AGM College Ground at 3pm.

Later on Tuesday, the prime minister will address another public gathering in Chikkodi at 6pm.

Karnataka which is being led by a chief minister Siddaramaiah's Congress government will go to the polls on 12th May with the results to be announced three days later on 15th.