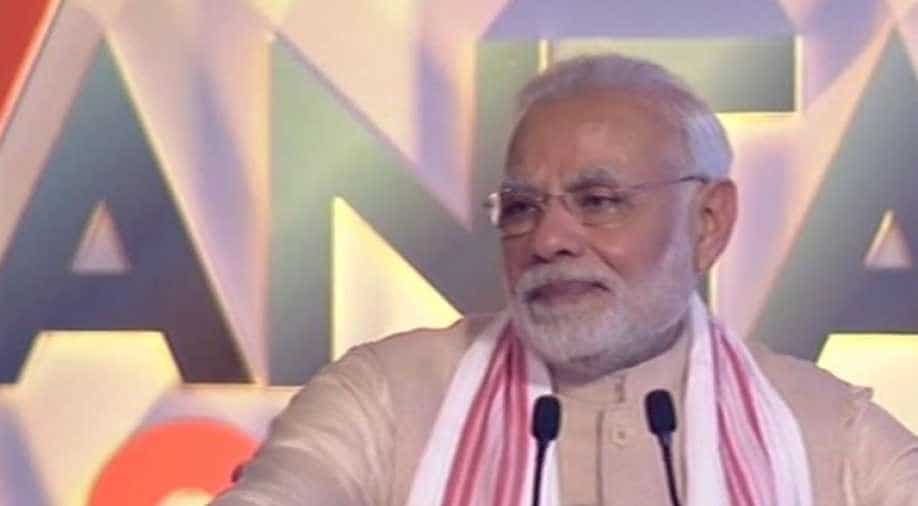 The prime minister said that India's growth story would be expedited once the Northeast developed.

"India's growth story will pick up more speed when people living in Northeast region will see fast development in a balanced manner," the prime minister said at the summit which aims at positioning the state as India's expressway to the Association of Southeast Asian Nations (ASEAN) countries.

"We created the Act East Policy and the Northeast is at the heart of it," PM Modi said

The prime minister said the tagline of the of the summit, 'Advantage Assam: India’s Expressway to ASEAN’, was very appropriate and gave a big message.

"Advantage Assam: India’s Expressway to ASEAN’ is not just a statement but it is a comprehensive vision," PM Modi said.

PM Modi praised Assam for ranking first among the Northeast states in the Ease of Doing Business report.

"Assam is ranked first among the Northeastern States in the Ease of Doing Business report. With the present leadership of the state government, Assam is going to further improve its current position to emerge as one of the most sought-after states for investment," the prime minister said.

PM Modi said his government was restructuring the National Bamboo mission with an amount of Rs 1300 crore.

"We are restructuring the 'National Bamboo mission' with the amount of Rs 1300 crore. This will benefit people of Northeast, especially the farmers of this region," he said.

PM Modi also said the working style of the government had been changed.

"We have changed the working style of govt. We want all programmes to be completed ahead of target," he said.

The prime minister also spoke about the Ayushman Bharat health insurance scheme announced in the budget, stating that it would benefit 45-50 crore people. He added that the scheme had enhanced possibilities of setting up hospitals in tier 2 and 3 cities.

"Government in the budget announced Ayushman Bharat Yojana, This is one of its kind, the biggest programme in the World. Someone who has lived in poverty, who had endured pains of poverty and moved forward, that person always realises that the biggest concern of poor is the treatment of diseases," PM Modi said.

He also spoke about how the development of the Micro, Small and Medium Enterprises (MSME) sector was a priority for the government which had given a "big relief" to the MSMEs in this year's budget.

"Development of the MSME sector is a priority for us. In this year's budget we are giving big relief to MSMEs by reducing the rate of income tax to 25% on companies reporting a turnover of up to Rs 250 crore.

Also in attendance was the Bhutanese PM Tshering Tobgay.

The two-day summit, organised by the Assam Government, in association with the Federation of Indian Chambers of Commerce and Industry (FICCI), will showcase Assam's manufacturing opportunities and geostrategic advantages to foreign and domestic investors.