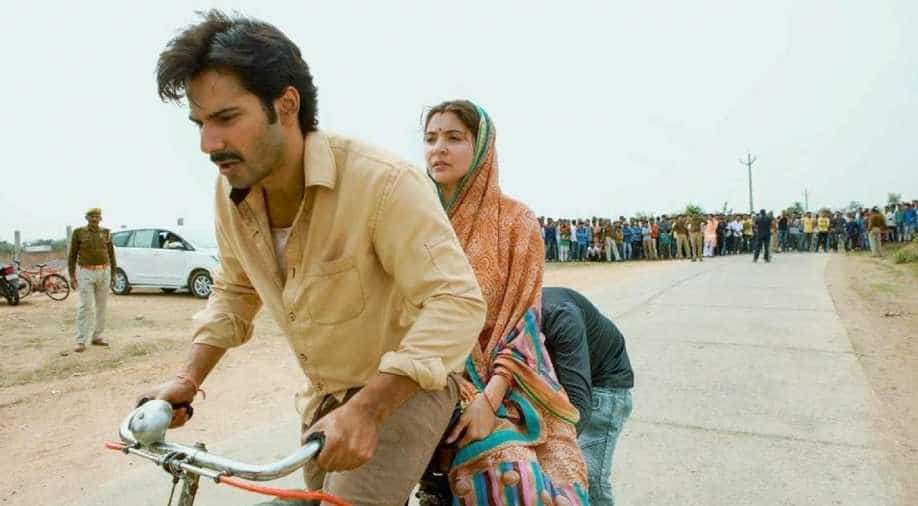 A still from the film Sui Dhaaga. Photograph:( Twitter )

Bollywood actors Varun Dhawan and Anushka Sharma have been working hard for their roles in the film Sui Dhaaga: Made in India which has peaked the curiosity of audience because of its name and the look that both lead characters are donning. (See first look)

Taking to Instagram, Yash Raj Films banner shared a picture of the two on a cycle from the sets of the film. Varun Dhawan reportedly rode a bicycle for straight 10 hours with Anushka Sharma riding pillion. The two are currently shooting in Chanderi, Madhya Pradesh.

Sharing the picture, YRF studio wrote: "Mauji takes Mamta for a cycle ride! @anushkasharma rode pillion as @varundvn cycled for close to 10 hours in the sweltering heat at Chanderi.”

In the photo, Varun and Anushka can be seen in simpleton clothes as they play a middle-class couple.

Sui Dhaaga is produced by Maneesh Sharma under the Yash Raj Films banner and has been written by Dum Laga Ke Haisha director Sharat Katariya. The film is slated for a release on September 28.

These pictures were shared earlier of the two working hard to gain skills like stitching and using a sewing machine as Varun plays the role of a tailor.

Varun is also shooting for Shoojit Sircar’s October while Anushka is working on Zero with Shah Rukh Khan and Katrina Kaif.