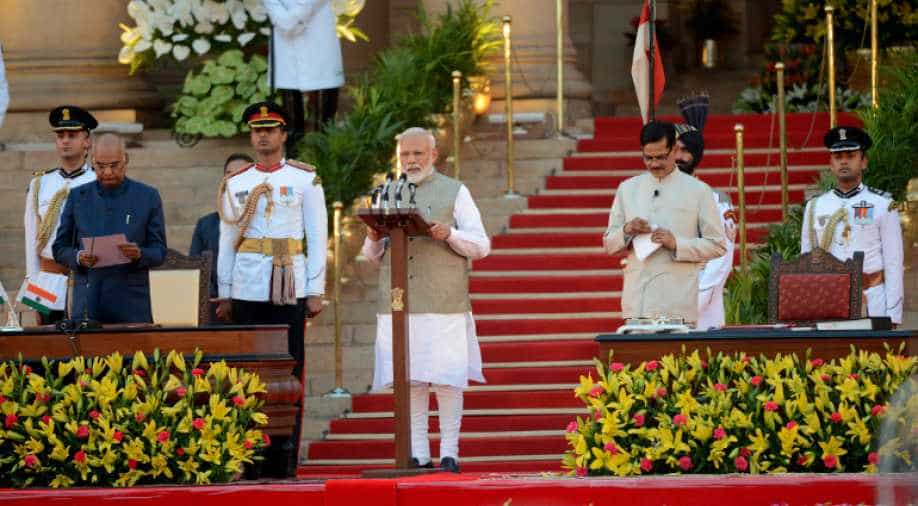 In a balancing act, two dominant communities of Karnataka--Lingayats and Vokkaligas-- have been accommodated in the Narendra Modi-led new council of ministers.

In a balancing act, two dominant communities of Karnataka--Lingayats and Vokkaligas-- have been accommodated in the Narendra Modi-led new council of ministers.

D V Sadananda Gowda and Pralhad Joshi, who were Karnataka BJP presidents, along with Belgaum MP Suresh Angadi have found place in the new ministry.

Induction of Joshi and Angadi is seen as a move to further consolidate the BJP's base in north Karnataka, where it is already strong.

In the recent Lok Sabha polls, the BJP had made deep inroads into the south also, which was considered the stronghold of the Congress and the JDS.

While Sadananda Gowda is a former Karnataka Chief Minister and had served as the minister in the previous Modi government, for Joshi and Angadi, both four-time MPs, it will be their first stint as ministers.

Meanwhile, Nirmala Sitharaman, who served as Defence Minister in the previous government, also was inducted into Modi's new Ministry.

She represents Karnataka in the Rajya Sabha.

With the induction of Gowda and Angadi, representation has been given to two dominant communities in the state- Vokkaligas and Lingayats respectively.

Joshi is a Brahmin, the community though does not form larger vote base has been loyal to BJP for long.

Sitharaman too is a Brahmin.

Region wise, prominence has been given to Mumbai Karnataka in the northern part of the state, considered as a strong bastion of the BJP, as both Joshi and Angadi hail from the region.

While Gowda originally belongs to coastal part of the state, he represents Bangalore North seat.

However, it is to be noted that though Lingayats were considered as the vote bank of BJP and Vokkaligas for JD(S) and to an extent Congress, what was seen in this Lok Sabha polls is larger consolidation of Hindu votes in favour of the BJP, including backward classes.

Also, region wise BJP that was considered to be strong in Mumbai Karnataka and coastal belt and to an extent in Hyderabad Karnataka, has made inroads distinctively into old Mysuru region this time, which was earlier said to be a battlefield reserved for the Congress and JD(S).

With the BJP winning 25 of the total 28 seats in the state, there was expectation in the Karnataka unit that members elected from the state would get more representation in the Narendra Modi ministry.

The state unit's feelings were clearly articulated by Karnataka chief B S Yeddyurappa a day ahead of the swearing-inof Modi as prime minister after a landslide win.

"I'm going to Delhi, I don't know what is in Prime Minister Narendra Modi's mind. As 25 MPs have got elected from here, Karnataka should get more representation is the expectation of every one, 6.5 crore people of Karnataka.

I will try to convince them about this," Yeddyurappa had told reporters in response to a question.

With expectation of more representation from Karnataka, there is also feeling expecting additional ministerial berth for Lingayat community, since more number of seats were won by Lingayats- nine in all.

Also, there is no representation to the SC community for now.

All the three MPs, who were inducted into the ministry Thursday, had defeated their opponents by a huge margin.

While Gowda had defeated his opponent Congress' Krishna Byre Gowda from Bangalore North by a margin of 1,47,518 votes, Joshi won the Dharwad Lok Sabha seat by a margin of 2,05,072, defeating Congress' Vinay Kulkarni, a former minister.

Angadi too had defeated Congress' Sadhunavar in Belgaum by a margin of 3,91,304 votes.