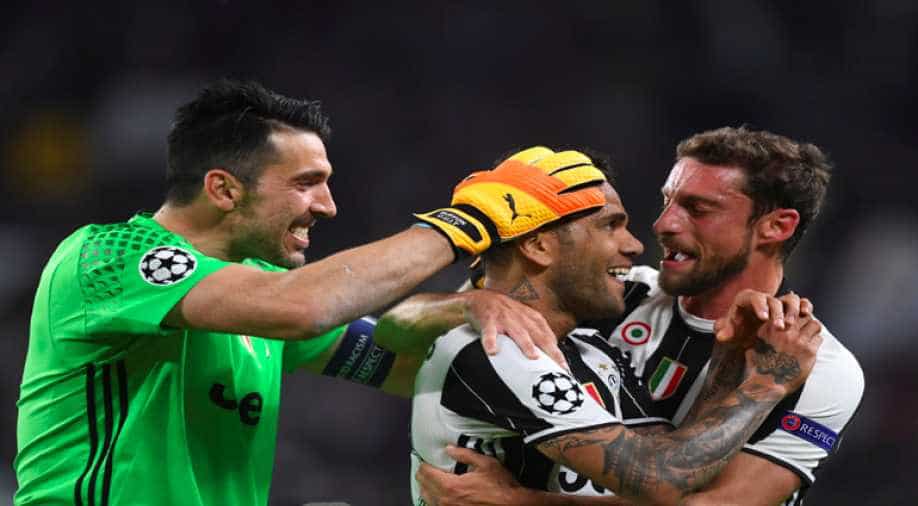 Juventus defender Dani Alves produced an inspired display capped by a stunning volleyed goal in a 2-1 win over AS Monaco on Tuesday that took the Italians into their second Champions League final in three years.

Brazilian Alves crossed for Mario Mandzukic to net the first goal in the semi-final, second leg and then scored the second through an explosive strike which, with Juve leading 2-0 from the first game, effectively finished off the tie by halftime.

Juventus were coasting until Monaco's exciting 18-year-old forward Kylian Mbappe pulled a goal back in the 69th minute, ending a run of six successive clean sheets in the competition for the Serie A side and veteran goalkeeper Gianluigi Buffon.

Tempers then flared when Monaco defender Kamil Glik appeared to stamp on forward Gonzalo Higuain, although the referee took no action against the Pole, leading to a bad-tempered final 20 minutes as Juve ran out comfortable 4-1 winners on aggregate.

They will face either Real Madrid or Atletico Madrid, who meet in the other semi at the Vicente Calderon on Wednesday with Real leading 3-0. The showpiece match is in Cardiff on June 3.

"I'm very happy with the way the lads played," said Juventus coach Massimiliano Allegri, whose side lost 3-1 to Barcelona in the 215 final. "It wasn't easy to play in the Champions League and they deserved to get to the final."

Monaco started brightly as they began the thankless task of trying to breach the Juve defence and the home side's 39-year-old keeper Buffon flapped at Bernardo Silva's cross in the first minute, although nobody was on hand to take advantage.

Mbappe then hit the inside of the post from a narrow angle, though he was flagged offside, and Radamel Falcao drove over from long range as the visitors pressed forward.

But Juventus always seemed to have too much guile and Higuain had already squandered one chance, with a failed attempt to dink the ball over goalkeeper Danijel Subasic, before Mandzukic put them ahead after 33 minutes.

The move started with Alex Sandro breaking out of defence to charge 50 metres down the left and the ball eventually found Alves who lofted a high cross over from the right.

Mandzukic's header was brilliantly saved by Subasic but the keeper could do nothing as his fellow Croat fired home the rebound from close range.

Both teams had further chances as the game ebbed and flowed but Juve were sharper in attack and struck again just before halftime.

Alves, who in the previous attack had played in Paulo Dybala with a precision pass, met Subasic's punched clearance with a full-blooded volley from 25 metres and the ball flew into the net with the goalkeeper out of position.

Juventus were able to drop the pace in the second half and neither Mbappe's goal nor Glik's tackle were anything more than mild annoyances as the reigning Italian champions cruised into next month's final.