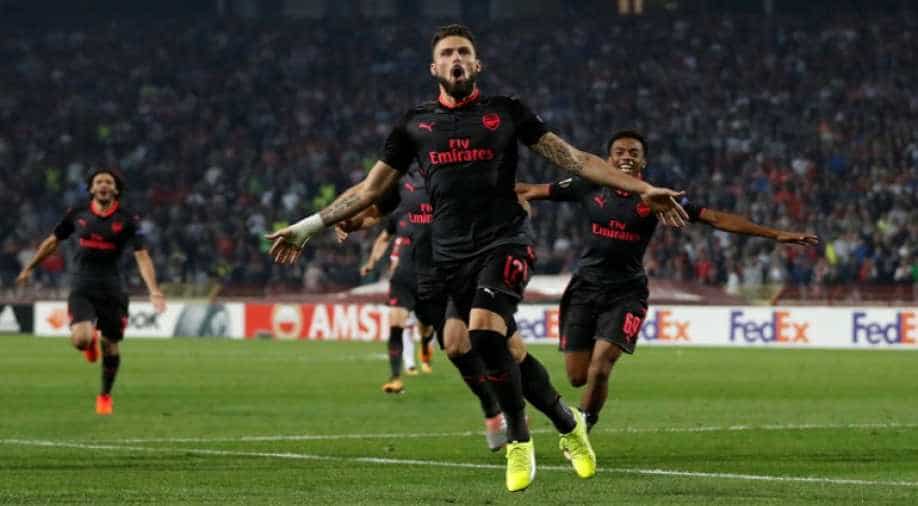 Everton's miserable Europa League run continued as they lost 2-1 at home to Olympique Lyonnais on Thursday and remained bottom of their group as Arsenal beat 10-man Red Star Belgrade 1-0 thanks to an acrobatic late goal by Olivier Giroud.

Everton badly needed a win against Lyon after taking one point from their previous two games but they went behind in the sixth minute to a penalty by Nabil Fekir.

Ashley Williams headed them level in the 69th after being fortunate to only be yellow-carded for igniting a mass brawl when he shoved visiting goalkeeper Anthony Lopes.

Everton nearly went ahead when a Gilfi Sigurdsson free kick came off the far post but former Chelsea forward Bertrand Traore struck to restore Lyon's lead, leaving Ronald Koeman's side at the foot of Group E with one point from three games.

The Dutch coach is under pressure as his side have only won three games out of 12 in all competitions and are 16th in the Premier League standings.

"We always feel pressure, from ourselves and pressure from outside," Everton defender Williams told reporters.

"It’s disappointing we didn’t get a result tonight because I felt we had a good attitude, and I thought we had a lot of chances."

Serie A side Atalanta lead the group on seven points after beating Apollon Limassol.

Arsenal were given a fright in Belgrade when Richmond Boaqye hit the woodwork but they took advantage of Milan Rodic getting sent off in the 81st minute as Giroud leapt to scoop a cushioned header from Theo Walcott into the top corner, completing a sweeping move through the middle.

Arsenal top Group H with a maximum nine points from three games after returning to winning ways following their 2-1 defeat by Watford in the Premier League.

"It was a very difficult game amid high and heated intensity," said Arsenal coach Arsene Wenger.

"The (home crowd) support was absolutely amazing, it was fantastic. Red Star are a massive club with a big history and the people here know their football."

BATE Borisov are second after beating Bundesliga side FC Koln, who have lost all three games in their first European campaign in 20 years.

Zenit St Petersburg, FCSB and Lazio are the only other teams to have won all three of their group games as seven-times European champions AC Milan lost their 100 percent record after a goalless home draw with AEK Athens.

Mario Balotelli opened the scoring for Nice against Lazio but the Serie A side quickly turned the game on its head to win 3-1, with Felipe Caicedo levelling soon after Balotelli's opener and Serb Sergej Milinkovic-Savic striking twice after halftime.

Real Sociedad hammered FK Vardar 6-0 to set a competition record for the biggest away win with the help of four goals from Brazilian forward Willian Jose, while fellow Liga side Athletic Bilbao were left on the brink of elimination as they drew 2-2 at Swedish side Ostersund.

A late goal from veteran striker Aritz Aduriz prevented a second consecutive defeat for the 2012 finalists, who are third in Group J on two points, four behind second-placed Zorya and five behind leaders Ostersund.

FC Copenhagen's game at Czech side Fastav Zlin was suspended in the 70th minute due to fog, but play resumed soon afterwards and the match ended 1-1.