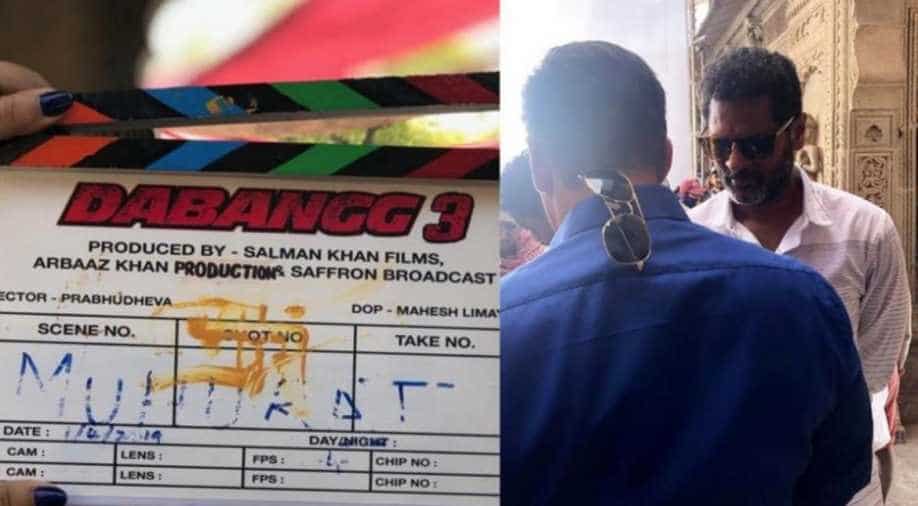 Pictures from the sets of Salman Khan’s Dabangg 3. Photograph:( Twitter )

Salman will next be seen in 'Bharat' this June with a bevvy of stars including Dish Patani, Tabu, Katrina Kaif and others.

Salman Khan has started work on ‘Dabangg 3’ with brother-producer Arbaaz Khan as they headed to Indore to start the first schedule of shooting. The Khan brothers flew in with director of the film, Prabhudeva.

The first schedule of shooting will happen in Mandleshwar and Maheshwar.

Salman shared the first picture from the sets of the film on Twitter and captioned it, “Day1.... #dabangg3 @arbaazkhanofficial @prabhudheva @nikhildwivedi25.”

The superstar will reprise his character of Chulbul Pandey in the film. In one of the pictures shared, he can be seen sporting his aviator sunglasses hanging from the back of his shirt collar. Prabhudheva can be seen in the photo with the famous Ahilya Fort in the background.

Some more photos were shared on fan pages. In another, a banner on the sets read: ‘Chulbul welfare fund dwara aayojit senior citizen samuhik vivah me aapka swagat hai (Welcome to the senior citizens mass wedding function organised by the Chulbul Welfare Fund)’.

Sonakshi will star opposite Salman, like the first two times. She will be seen portraying Rajjo. She was seen commenting on Salman’s video saying “Seeeee you soooooon!!!!”