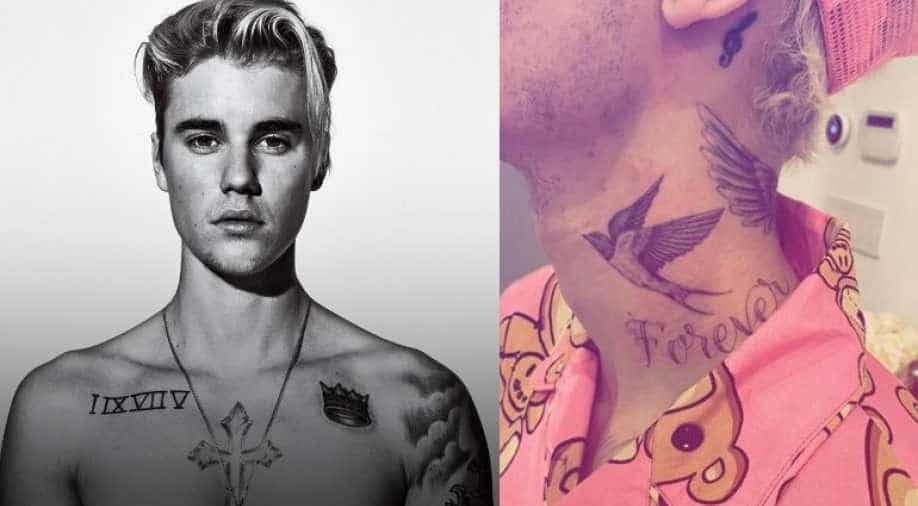 Canadian singer-songwriter Justin Bieber has added yet another tattoo to his collection and that too in one of the most painful areas that you can get on the body, his0 neck.

Interestingly, Bieber has been going under the ink since he was 16 and now and has over 50 permanent markings all over his body, covering his arms, chest and even one on his face reported the news agency.

The 25-year-old star took to Instagram to share the new tattoo which is a swallow bird with the word "Forever." He captioned the snap: "Forever thanks @_dr_woo_."

The newest addition to his collection is located on the left-hand side of his neck below the music note tattoo behind his ear. The crooner's image has dramatically been changed from his beginning days and as he has now nearly covered the upper half of his body in ink.

The star has a range of tattoos include religious symbols, animals, words and even a tattoo dedicated to his ex Selena Gomez. Speaking to a magazine he explained: "This is my ex-girlfriend so I kinda tried to cover her face up with some shading but people still know''.

The 'Baby' singer's tattoo journey initiated when he first stepped into a tattoo parlour on his 16th birthday and got it a bird in one of the most hidden places of his body so that nobody knew he was getting inked.

On which the star stated, "So I wanted to make sure it wasn't visible so I put it down here."Since then Tattoos have become a way of expression for Justin.

The 'Mistletoe' singer, tied the knot with American model and TV personality Hailey Baldwin in September 2018 and it was a matter of time before the singer dedicated a tattoo to her. Justin got the word 'grace' tattooed very faintly above his right eyebrow.