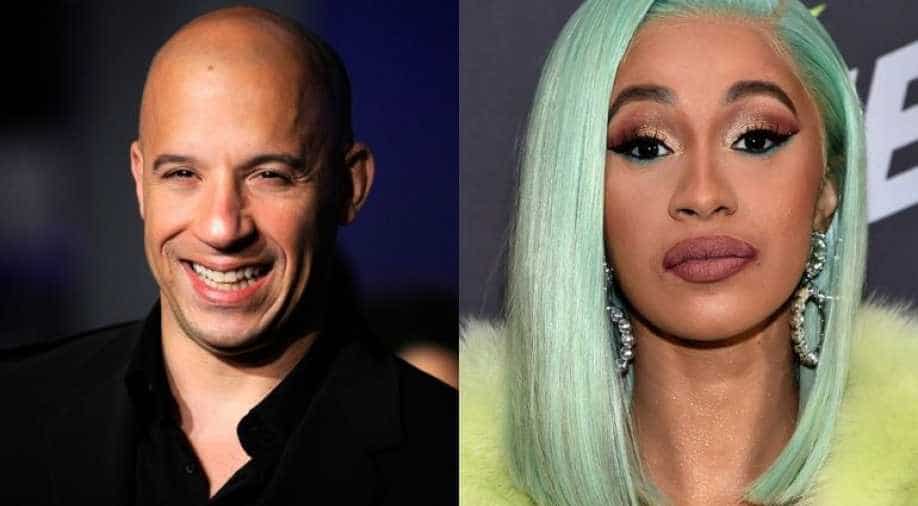 File image of Vin Diesel and Cardi B Photograph:( Twitter )

Cardi B makes her debut opposite Jennifer Lopez in 'Hustlers', has she shots a small part in the upcoming film.

Seems like it is raining surprises on the sets of 'Fast and Furious 9'! A day after Latin singer Ozuna joined the cast of the film; Vin Diesel introduced yet another addition - rapper Cardi B.

After making her debut opposite Jennifer Lopez in 'Hustlers', Cardi shot a small part in the upcoming film. Diesel disclosed the casting on Tuesday in a clip shared on Instagram featuring him along with the rapper.

The two were seemingly dressed in the film's costumes as Cardi was seen in a black jacket and gloves, while her co-star was in a grey leather jacket. Justin Lin, the director behind 'Fast & Furious 6' has returned to helm the ninth installment with Diesel starring as Dominic Toretto.

The screenplay has been written by Dan Casey from a story by Lin and Alfredo Botello. Apart from Cardi and Diesel, the film will also star Jordana Brewster, Michelle Rodriguez, Tyrese Gibson, Helen Mirren, and Charlize Theron. It is set for a release on May 22 next year.