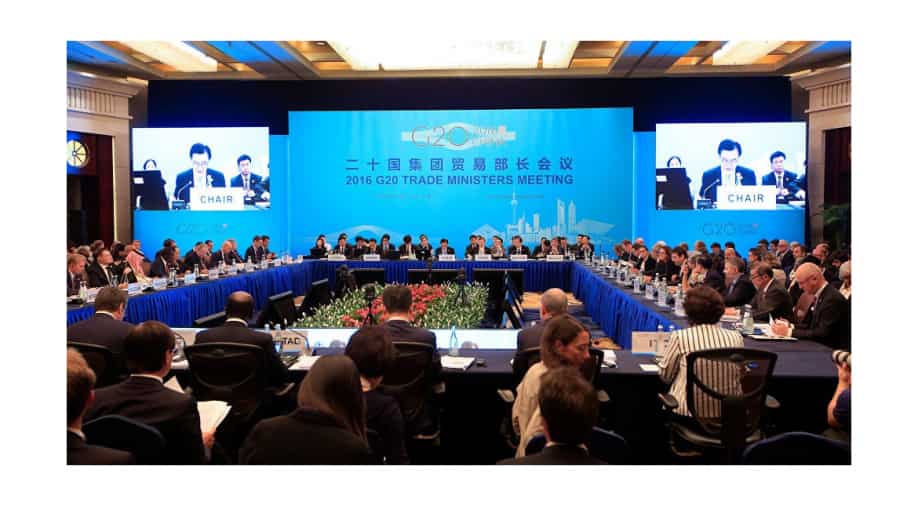 The G20 nations, which account for 85 per cent of global trade said that new trade restrictions in the group had reached the highest monthly average registered since the WTO began monitoring in 2009. Photograph:( Twitter )

Follow Us
The world`s top 20 economies will work to boost sluggish global trade despite growing protectionism, overcapacity concerns, and uncertainty over Brexit, G20 trade ministers said today at a meeting in Shanghai.

"The global recovery continues, but it remains uneven and falls short of our ambition for strong, sustainable and balanced growth. Downside risks and vulnerabilities persist," the trade ministers said in a joint statement, adding that trade should remain "an important engine" to spur global growth.

The G20 nations, which account for 85 per cent of global trade, admitted that protectionism has been rising since the financial crisis, and said that new trade restrictions in the group had reached the highest monthly average registered since the World Trade Organisation (WTO) began monitoring in 2009.

"We note with concern that despite the G20's repeated pledge, the stock of restrictive measure affecting trade in goods and services has continued to rise," they said in the statement.

The world's leading economies over the weekend pledged to oppose trade protectionism and reiterated a promise not to add new protective measures until 2018.

Global trade governance to be improve to combat slowdown

Pertinent to mention that global trade is expected to grow at a tepid 2.8 per cent in 2016, the WTO had said in April.

And this year is expected to be the fifth in a row where trade grew at less than three per cent, its weakest sustained level in 30 years, WTO Director-General Roberto Azevedo said on Friday ahead of the talks.

To combat the global slowdown, the ministers said they agreed to improve global trade governance and to work towards easing and liberalising trade.Concerns over China's production overcapacity in steel have led to trade disputes with the EU and US, and China`s vice commerce minister Wang Shouwen said today that the G20 economies "have realised the necessity to take global cooperation to handle the challenge caused by production overcapacity".

But despite claims that China is dumping steel in foreign markets, he said "China's effort in (handling) over capacity has been highly recognised" by the group.

"While some other countries are talking about how to cut down production, Chinese government has already taken measures which have been effective."

Meanwhile Britain's referendum vote to leave the European Union (EU) has added new concerns for the recovery of global economic and trade growth.

Britain's trade minister Mark Price told the Financial Times in Beijing ahead of the weekend talk that tariffs would jump to an average level of at least three per cent after its exit from the EU.

He said it's time to "start exploring options" on trade agreements and "China is making very positive noises at the moment", the report said.