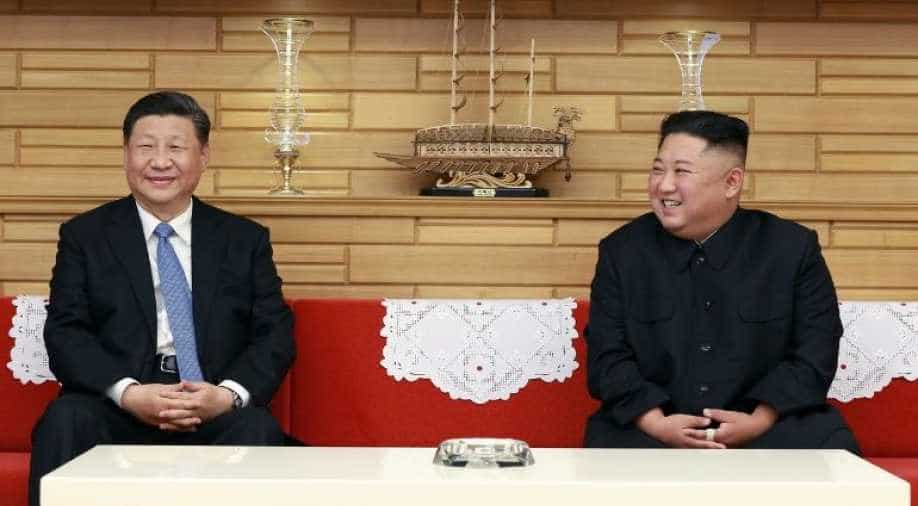 The two countries have reaped plentiful fruits in bilateral exchanges and cooperation in various fields.

Chinese President Xi Jinping and Kim Jong-Un, top leader of the Democratic People's Republic of Korea (DPRK), on Sunday, exchanged congratulations on the 70th anniversary of the establishment of the two countries' diplomatic ties.

The establishment of China-DPRK diplomatic ties 70 years ago bore epoch-making significance in the history of the two parties' and the two countries' relations, Xi said.

Noting that the DPRK is among the first countries to establish diplomatic ties with China, Xi said that over the past 70 years, under the care and joint efforts of successive leaders of the two parties and two countries, the traditional friendship between China and the DPRK has stood the test of time and changes in the international landscape, grown stronger with the lapse of time, and taken roots in the hearts of the two peoples.

The two countries, added Xi, have reaped plentiful fruits in bilateral exchanges and cooperation in various fields, which has not only greatly promoted the prosperity and progress of their respective socialist causes, but also played a significant and positive role in maintaining regional peace and stability.

Xi pointed out that the traditional bilateral friendship is a priceless treasure shared by the two parties, two countries and two peoples, and that to maintain, cement and develop bilateral relations is an unshakable policy of the CPC and the Chinese government.

Reaffirming that he highly values the development of China-DPRK relations as well as the mutual trust and friendship with Kim, Xi noted that since last year he and Kim have met five times and reached a series of consensuses, jointly ushering bilateral ties into a new era.

China, he added, stands ready to work with the DPRK to take the 70th anniversary of diplomatic relations as an opportunity and promote a long-term, healthy and stable development of bilateral ties, so as to create more benefits for both countries and both peoples.

Hailing the establishment of DPRK-China diplomatic ties as an epoch-making event, Kim said that over the past 70 years, the two parties and two peoples have joined hands in weal and woe and weathered all tempests in the course of defending and promoting the cause of socialism, and have written a history of a great friendship.

The DPRK-China relationship has now entered an important and critical period of inheriting the past and forging ahead into the future, Kim said, adding that it is the unwavering position of himself, the WPK and the DPRK to resolutely carry forward the traditional friendship with China and realize an all-round revitalization of the friendly and cooperative ties between the two countries.

Kim said he is willing to work hand in hand with Xi to satisfy the two peoples' shared aspiration of cementing and developing the DPRK-China friendship, which is admired by the world, and by dint of friendship and unity, to firmly uphold the socialist cause and safeguard peace and stability of the Korean Peninsula and the world.

China and the DPRK's relationship has a long history. The DPRK was one of the first countries to establish a diplomatic relationship with the People's Republic of China just five days after the PRC was founded on October 1, 1949.