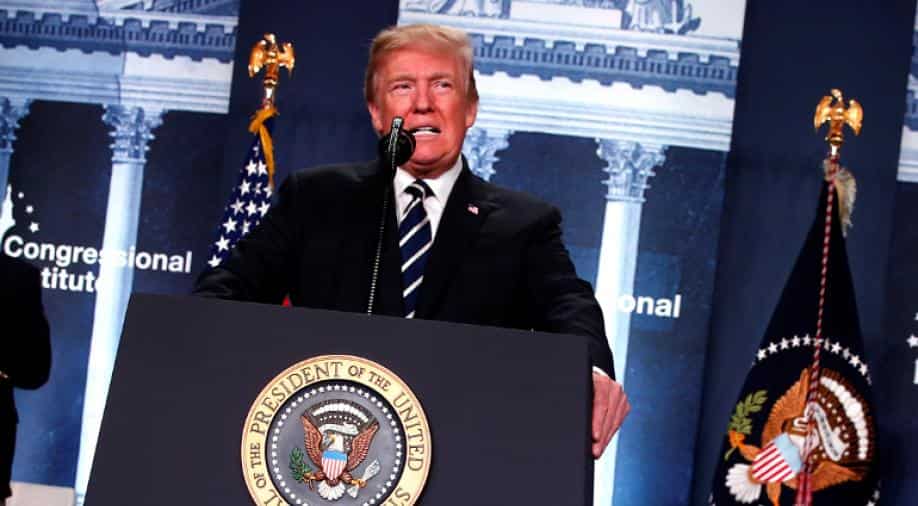 The United States on Monday blasted as "unfair" Chinese tariffs imposed on 128 US imports worth $3 billion, including fruit and pork, in the latest tit-for-tat over US duties on steel and aluminium.

China's action, which was decided by the customs tariff commission of the State Council, followed weeks of rhetoric that has raised fears of a trade war between the world's two biggest economies.

President Donald Trump's administration had said its duties were aimed at steel and aluminium imports that it deemed a threat to US national security, but China's Commerce Ministry called that reasoning an "abuse" of World Trade Organization (WTO) guidelines.

The US measures "are directed only at a few countries, seriously violating the principle of non-discrimination as a cornerstone of the multilateral trading system, which seriously infringed the interests of the Chinese side," said a statement on the Commerce Ministry website.

Trump has repeatedly railed against China's massive trade surplus with the United States and promised during the election campaign to take steps to slash the US deficit.

His White House again pointed the finger at Beijing.

"China's subsidization and continued overcapacity is the root cause" of what deputy White House spokeswoman Lindsay Walters called a crisis affecting steel.

"Instead of targeting fairly traded US exports, China needs to stop its unfair trading practices, which are harming US national security and distorting global markets," she said.

Beijing had warned last month that it was considering the tariffs of 15 percent and 25 percent on a range of products that also include wine, nuts and aluminium scrap. They came into force on Monday, Xinhua said, citing a government statement.

The levies are in response to tariffs of 10 percent on aluminium and 25 percent on steel that have also angered US allies.

"We hope that the United States can withdraw measures that violate WTO rules as soon as possible to put trade in the relevant products between China and the US back on a normal track," the Commerce Ministry statement said.

"Cooperation between China and the United States, the world's two largest economies, is the only correct choice."

Trump has temporarily suspended the tariffs for the European Union as well as Argentina, Australia, Brazil, Canada, Mexico and South Korea.

But the White House has unveiled plans to impose new tariffs on about $60 billion of Chinese imports over the "theft" of intellectual property.

But Beijing has so far held fire against major US imports such as soybeans or Boeing aircraft -- items that the state-run daily Global Times suggested should be targeted.

The nationalistic newspaper said in an editorial last week that China has "nearly completed its list of retaliatory tariffs on US products and will release it soon."

"The list will involve major Chinese imports from the US," the newspaper wrote, without saying which items were included.

"This will deal a heavy blow to Washington that aggressively wields the stick of trade war and will make the US pay a price for its radical trade policy toward China," the Global Times wrote.

Despite the rhetoric, US Commerce Secretary Wilbur Ross on Thursday suggested the new measures on intellectual property were a "prelude to a set of negotiations".

US Senator Elizabeth Warren, a Democrat, held meetings with Chinese officials on Friday and Saturday, including Vice Premier Liu.

"With Vice Premier Liu He, I had an extensive discussion about how China's trade-distorting measures end up hurting American workers," Warren wrote on Twitter.

"I've long been skeptical of trade policy -– both at home and abroad -– that caters to big corporations instead of working families."