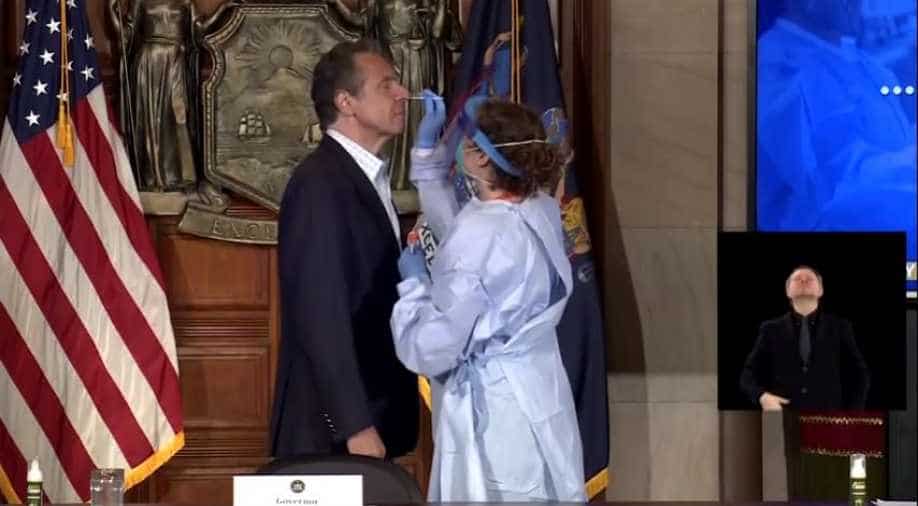 "You don't have to be New York tough to take that test," the governor said during the live broadcast of his popular daily briefing.

New York Governor Andrew Cuomo on Sunday took a coronavirus test during his televised briefing and urged any fellow New Yorkers with symptoms or having been exposed to the virus to follow his example.

"You don't have to be New York tough to take that test," he said during the live broadcast of his popular daily briefing.

Cuomo's sometimes folksy and often informative briefings have been followed by thousands of viewers since New York emerged as a COVID-19 hotspot in the US, with more than 350,000 cases and more than 22,000 confirmed deaths.

"You have to be smart, united, disciplined; you have to love yourself, your family, New Yorkers," he said, after a nurse in the protective gown, mask and face shield had Cuomo close his eyes while she inserted a nasal swab to take a sample.

"If I am not here tomorrow, that means I tested positive," the governor quipped. He has been tested several times previously, he said, but never before the public.

Cuomo said the criteria for being tested had been expanded to include not just those with flu-like symptoms, but also people returning to work, medical and nursing-home personnel, and anyone who interacts with the public at work or who has been exposed to a sick person.

"We just don't have enough New Yorkers coming to be tested," which is vitally important as parts of the state reopen some non-essential activities, the governor said.

Later, Cuomo turned to Twitter to underline his message, saying: "It's quick, easy and painless. If I have time, you do too."