US lawmakers meet on border security, scrambling to avert shutdown 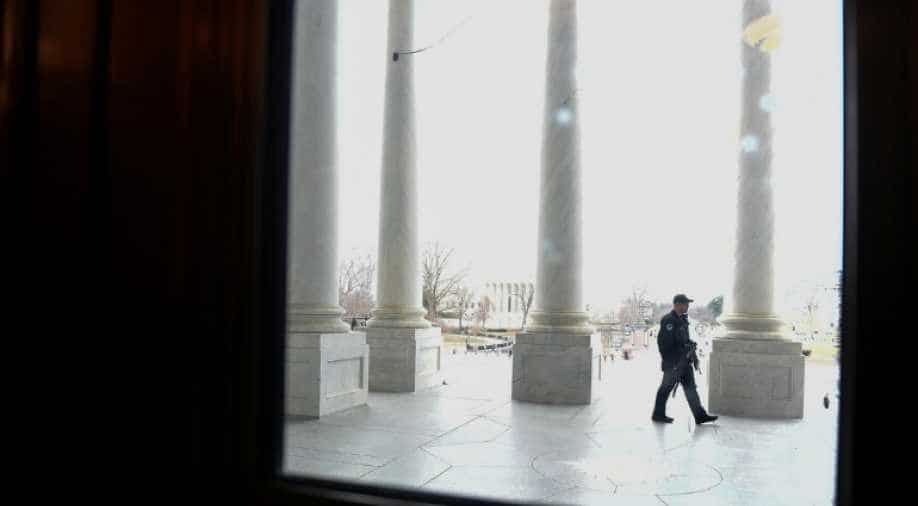 A police officer patrols the West Front of the US Capitol in Washington. Photograph:( Reuters )

The talks, which had broken down over the weekend, restarted in the US Capitol just hours before a scheduled rally in the Texas border city of El Paso, where President Donald Trump will promote his promised wall along the US-Mexico border, a proposal opposed by Democrats.

The top four Democratic and Republican congressional negotiators on border security funding resumed talks on Monday, with the possibility of another partial US government shutdown looming if they fail to reach a deal by a Friday deadline.

The talks, which had broken down over the weekend, restarted in the US Capitol just hours before a scheduled rally in the Texas border city of El Paso, where President Donald Trump will promote his promised wall along the US-Mexico border, a proposal opposed by Democrats.

An anti-wall protest will greet the Republican president, led by hometown Democrat Beto O'Rourke, the former congressman who is considering running for his party's 2020 presidential nomination after gaining national prominence last year by nearly upsetting Republican Ted Cruz in a US Senate race in Texas.

In Washington, the lawmakers hope to reach an agreement on Monday to allow time for the legislation to pass the House of Representatives and Senate and get Trump's signature by Friday, when funding is due to expire for the Department of Homeland Security, the Justice Department and several other federal agencies.

Trump, who in December said he would be "proud" to shut the federal government over border security, took a different tack on Monday. "It's up to the Democrats," Trump told reporters at the White House when asked whether the government was headed toward its second shutdown of the winter.

The talks stumbled over the weekend over funding for physical barriers along the border and a Democratic proposal to reduce allotted spaces in immigration detention facilities for people facing deportation.

The White House and the top Republican in Congress on Monday blasted the Democratic plan, which calls for lowering an existing cap on beds at the detention facilities to 35,520 from the current 40,520 in return for giving Republicans some of the money they want for physical border barriers.

Senate Majority Leader Mitch McConnell called the proposal a "poison pill" introduced into the talks by the Democrats, saying it would result in the release of thousands of illegal immigrants.

House of Representatives Appropriations Committee Chairwoman Nita Lowey, a Democrat who heads the House-Senate negotiating committee, expressed hope for a deal as she headed into the meeting.

Granger said some progress was made and the four would meet again later in the evening. "We had a good discussion. It’s like all negotiations go. We put out what we want, what they want, we didn’t finish, we will be meeting again today," she said.

Trump's December demand for $5.7 billion to help construct a border wall triggered a 35-day partial government shutdown that ended last month without him getting wall funding. Trump agreed to reopen the government for three weeks to allow congressional negotiators time to find a compromise on government funding for the rest of the fiscal year, which ends on September 30, to avert another shutdown on February 15.

Trump made a border wall one of his central 2016 campaign promises, saying it is needed to curb illegal immigration, drug trafficking and other crimes. Democrats, who assumed control of the House last month from Trump's fellow Republicans, have called a wall ineffective, expensive and immoral.

Democrats generally push for less use of detention, arguing it is much cheaper to release some immigrants but require restrictions on them such as wearing ankle bracelets that track their location. Republicans want to increase the number of beds in detention facilities to enable holding more people to speed up and expand deportations.

Trump, who has sought to crack down on illegal and legal immigration and has called the situation at the border a national security crisis, deployed 3,750 more US troops there this month.

"The border 'emergency' is nothing more than a manufactured crisis - and CA's National Guard will not be part of this political theatre," Newsom wrote on Twitter.