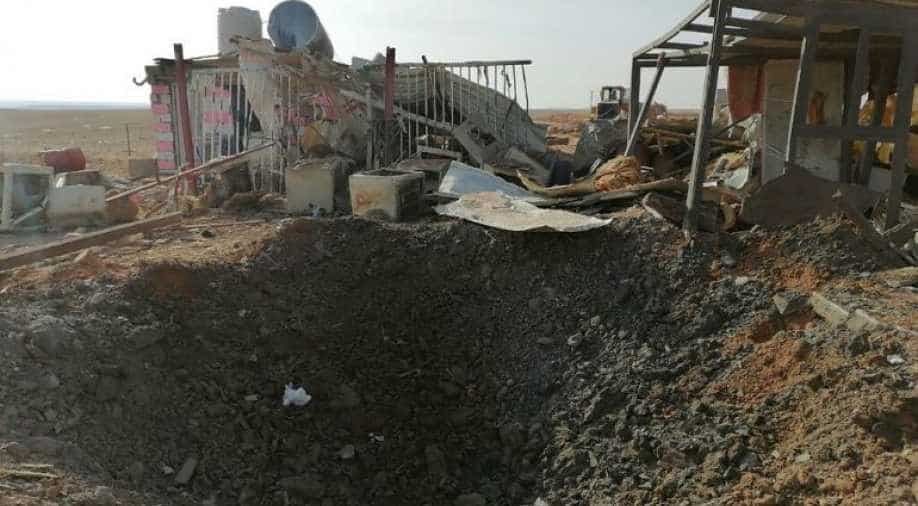 A hole left after an air strike is seen at headquarters of Kataib Hezbollah militia group in Qaim, Iraq, December 30, 2019. Photograph:( Reuters )

The US military command for Africa (AFRICOM), "conducted an airstrike against Al-Shabaab in the vicinity of Qeycad" in Galmudug province 300 miles (500 kilometers) north of the capital Mogadishu, Pentagon spokeswoman Cindi King told AFP

The US military conducted an air strike in Somalia on Friday against Al Qaeda affiliated Al-Shabaab jihadists, the second in four days after a six-month hiatus, the Pentagon said.

The US military command for Africa (AFRICOM), "conducted an airstrike against Al-Shabaab in the vicinity of Qeycad" in Galmudug province 300 miles (500 kilometers) north of the capital Mogadishu, Pentagon spokeswoman Cindi King told AFP.

The strike was carried out by a drone and there were no US forces on the ground, King said, adding no further details could be provided.

The strike was the second carried out by the US military in Somalia in a week, and only the second under US President Joe Biden, who took office in January this year.

As soon as Biden arrived at the White House, he limited the use of drones against jihadist groups outside US theatres of war.

That reversed the policy of his predecessor Donald Trump, who had given the military carte blanche in countries such as Somalia and Libya.

King noted "US forces are authorised to conduct strikes in support of combatant commander-designated partner forces under the 2001 AUMF," referring to the Authorisation for the Use of Military Force, whose authority US presidents have relied on to launch operations against armed Islamist groups.

Last month, the US House of Representatives voted to repeal a 2002 use-of-force measure that gave the US military the legal authority to invade Iraq and has since been used to justify military action against groups linked to Al Qaeda and the Taliban in Afghanistan.

Supporters of repealing the 2002 AUMF argue it has long outlived its purpose and that Congress should reclaim its war-making powers.

No elected officials have indicated there is any immediate plan to reverse the 2001 measure.

Defence Department spokesman John Kirby said last week that AFRICOM commander General Stephen Townsend has "the authority to act in defense of our forces and our Somali partners."

The recent strikes "underscore the threat that Al Shabaab poses in Somalia, and in certainly the Horn of Africa," Kirby said.

"That threat remains significant, and we're going to continue to be vigilant about it."

Drone strikes had multiplied during Trump's term, going from 11 in Somalia in 2015, to 64 in 2019 and 54 in 2020, according to the non-governmental group Airwars, which monitors civilian deaths in bombings around the world.

Just before he left office, Trump ordered the withdrawal of some 700 special forces soldiers who were deployed in Somalia to train and advise the Somali army.