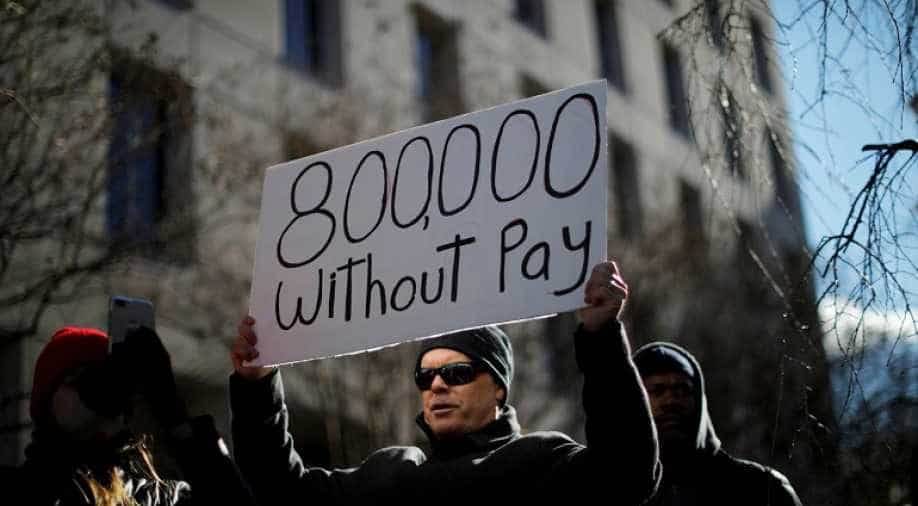 A demonstrator holds a sign, signifying hundreds of thousands of federal employees who won’t be receiving their paychecks as a result of the partial government shutdown, during a “Rally to End the Shutdown” in Washington, January 10, 2019. Photograph:( Reuters )

US job creation saw another blockbuster month in January, blowing past the government shutdown, but that disruption helped to push the unemployment rate higher, the Labour Department reported Friday.

The construction, health care, hospitality and retail sectors added tens of thousands workers, another sign the robust labour market remain a fundamental source of strength even though the US economy is expected to slow in 2019.

The new numbers were also fresh welcome news for President Donald Trump, whose already-low public approval rating suffered in the wake of the longest government shutdown in US history.

Employers added 304,000 net new positions last month -- the highest in nearly a year and almost double what economists had predicted -- while growth in worker pay held steady just above inflation, according to the report.

However, the five-week government shutdown was at least partly responsible for an uptick in the jobless rate to 4.0 per cent, the highest in seven months.

And hiring in December was revised sharply downward to a still-strong 222,000, but far lower than the 312,000 positions initially reported.

While the partial shutdown of the federal government between December and January idled 800,000 government workers, the Labor Department still counted furloughed employees -- who would receive back pay -- as employed, leaving the monthly job creation numbers unaffected.

But the shutdown was also a driver of the rise in the unemployment rate, since the separate survey of households used to determine the joblessness counted furloughed workers as well as contractors as unemployed.

Meanwhile, the increase in unemployment also was the result of more workers coming off the sidelines to join the job hunt. That increased the size of the labour force, driving the closely watched laborforce participation rate up to 63.2 per cent, its highest level in more than five years.

The shutdown also drove about a half million people into part-time work, swelling this group to 5.1 million, its highest level in 16 months.

Hourly pay grew a token 0.1 per cent over December but was up 3.2 per cent over January of last year, well above consumer inflation of 1.9 per cent in the same period, leaving American workers with greater purchasing power.

Employment in leisure and hospitality grew by 74,000 jobs for the month, with restaurants and bars adding 32,000, while construction added 52,000 workers and hospitals and ambulatory care centres together added about 41,000 net new positions.