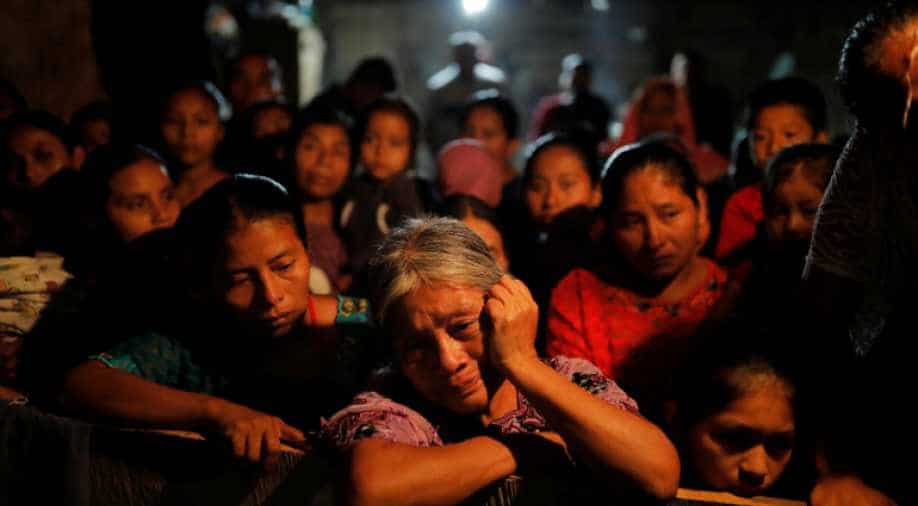 Jakelin Caal's granadmother. Seven-year-old Jakelin handed herself in to US border agents earlier this month, and died after developing a high fever while in the custody of US Customs and Border Protection. Photograph:( Reuters )

The latest fatality prompted sharp criticism from some Democrats, and US Department of Homeland Security Secretary Kirstjen Nielsen announced policy changes on Wednesday aimed at preventing future deaths of children in custody.

Migrant children will receive more thorough medical checks after an 8-year-old Guatemalan boy died in US custody this week, the US government said on Wednesday, and his mother expressed grief and despair over his death.

Felipe Gomez Alonzo, who died on Monday, and his father, Agustin, 47, came from the western municipality of Nenton in Huehuetenango province, Guatemalan Foreign Ministry spokeswoman Marta Larra said. The pair trekked to the Mexico-US border, joining thousands of others who have left their remote area.

Gomez, belonged to a family of indigenous Maya, was the second child to die this month in US custody after crossing from Mexico, following the December 8 death of Jakelin Caal, a 7-year-old girl also from Guatemala.

"I'm sad and in despair over the death of my son," the boy's 32-year-old mother, Catarina Alonzo, told Reuters by phone from her home in the tiny village of Yalambojoch, speaking through a translator because of her limited Spanish.

The latest fatality prompted sharp criticism from some Democrats, and US Department of Homeland Security Secretary Kirstjen Nielsen announced policy changes on Wednesday aimed at preventing future deaths of children in custody.

All children in Border Patrol custody have been given a "thorough medical screening," and moving forward all children will receive "a more thorough hands on assessment" as soon as possible after being apprehended, whether or not the adult with them asks for one, Nielsen said in a statement.

Gomez's parents, who speak a Maya language called Chuj and little Spanish, have requested an autopsy be done as quickly as possible so their son's body can be repatriated to Guatemala, Larra said. The results are expected in about a week, she added.

The US Customs and Border Protection (CBP) agency has not released an official cause of death.

Most families in Nenton, a mountainous area near the Mexican border, are of indigenous origin and subsist on corn and beans, as well as money sent back from relatives working in the United States and Mexico, according to a local government report.

Huehuetenango sends the highest number of migrants abroad from Guatemala every year, Larra at the foreign ministry said.

Nielsen said the death of migrant children in US custody is rare, noting that in the fiscal year ending September 30, six migrants died under the CBP's auspices, none of whom were children. It had been more than a decade since a child died in CBP custody, she added.

"It is now clear that migrants, particularly children, are increasingly facing medical challenges and harbouring illness caused by their long and dangerous journey," Nielsen said, noting she would travel to the border later this week to observe the medical screenings and conditions at Border Patrol stations.

She placed some blame for the risks faced by migrant children on their families. "Smugglers, traffickers, and their own parents put these minors at risk by embarking on the dangerous and arduous journey north," Nielsen said.

Gomez and his father were detained on December 18 in El Paso, Texas, for illegally entering the country, the agency said.

On the morning of December 24, an agent noticed Gomez "was coughing and appeared to have glossy eyes," CBP said, and the father and son were transferred to a nearby hospital.

The boy was found to have a fever and cold and was released with a prescription for an antibiotic and Ibuprofen. That evening, Gomez started vomiting, and his father declined medical help because his son had been feeling better, CBP said.

A few hours later, Gomez again began feeling nauseous and was taken back to the hospital, where he died just before midnight. CBP previously said he had died early on Tuesday.

US Representative Raul Ruiz of California said on a conference call that CBP facilities he had visited last week near El Paso were "dehumanizing" and not equipped to handle emergencies in remote areas of the Mexico-US border.

"This is under the care and the responsibility and the custody of the United States government, and they do not meet the most minimal basic standards of humanitarian health," he said.