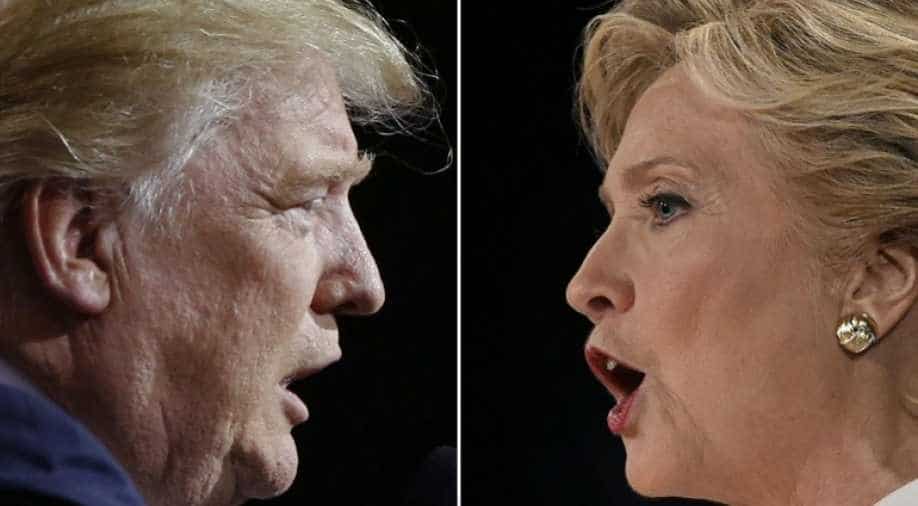 Some 40 million Americans have already cast ballots in states that allow early voting, and tens of millions more will turn out on Tuesday. The actual election is on Wednesday. Photograph:( AFP )

Polling stations opened Tuesday as the first ballots were cast in the long-awaited election pitting Hillary Clinton against Donald Trump.

Voters in nine states got the first crack at electing the new president, with the rest of the country due to get started later in the day.

Hillary Clinton and Donald Trump gave US voters a stark choice between her vision of unity and his promise to take back power from Washington's corrupt elites.

On the final day of the  presidential campaign that has left a bemused world looking on in concern for its greatest power, Trump doubled down on his unabashed appeal to popular resentment.

The Democrat Clinton has had sharp words for her rival, a 70-year-old property tycoon who seized the conservative Republican Party and turned it into a vehicle for his populist bombast, but she ended the race pleading for unity.

'It's time to fight for America. I'm not a politician, I can say proudly. My only special interest is you,' Trump told a raucous crowd, vowing to end free trade, control immigration and 'bring back' jobs

Some 40 million Americans have already cast ballots in states that allow early voting, and tens of millions more will turn out on Tuesday for what is shaping up to be a historic clash.

"It's time to fight for America. I'm not a politician, I can say proudly. My only special interest is you," Trump told a raucous crowd, vowing to end free trade, control immigration and "bring back" jobs.

Clinton went into Election Day as the favorite to become the first US woman president after spending eight years in the White House as the first lady in the 1990s.

A Reuters/Ipsos States of the Nation poll gave Clinton a 90 per cent chance of defeating Trump and said she was on track to win 303 electoral college votes out of 270 needed, to Trump's 235.

But the campaign has been bruising -- she has been dogged by allegations that she put US secrets at risk on her private email server while at the State Department and the race remains perilously close in a handful of key states.

Trump advisers said the level of his support was not apparent in the polling and believed the New York businessman was in position for an upset victory along the lines of the "Brexit" vote in June to pull Britain from the European Union.

Support for Trump dropped after footage emerged of him bragging about sexual assault and at least a dozen women came forward to accuse him, but polls have tightened as the big day approaches.

But a Clinton win in votes casts will mean nothing if she does not win the electoral college, fending off a last-ditch Trump bid to secure Florida and poach North Carolina, Michigan, Ohio, Nevada or New Hampshire.

As Election Day approached -- to the relief of the many voters left cold by the long drawn-out slog through the political mud -- both candidates maintained break-neck schedules.

Clinton made stops in three battleground states, and deployed President Barack Obama as cheerleader-in-chief in another, before they were to join up at a star-studded grand finale in Philadelphia.

"The world is watching us right now. This is one of those moments. Don't let it slip away," Obama said in New Hampshire.

Trump sneered at Clinton's choice of pop stars -- Bruce Springsteen and Lady Gaga -- to attract the crowds, and stuck to his stump speech, each new version slightly more aggressive than the last.

"It's time to reject the media and political elite that has bled our country dry," he declared, pointing to the press pen at his event, and whipping up cries of "Drain the swamp!" from his fervent supporters.

Trump's vow to rip up America's free trade deals, build a wall on the Mexican border and renegotiate US treaty alliances has spooked world markets seeking stability after the recent global slowdown.

Last week, US stocks as measured by the S&P 500 index fell for nine straight days for the first time since 1980, only to recover a little when the FBI confirmed Clinton would not face prosecution over her emails.

Global stock markets surged on Monday, with Wall Street gaining more than two percent, as hopes for a Clinton victory rose after FBI director James Comey's weekend announcement that she was in the clear.

The dollar also gained, and analyst Patrick O'Hare of briefing.com said: "You can certainly take for granted from today's rally that the market seems to like the idea of Mrs. Clinton being elected president."