US election 2016: Increase in voter turnout among African Americans, Hispanics 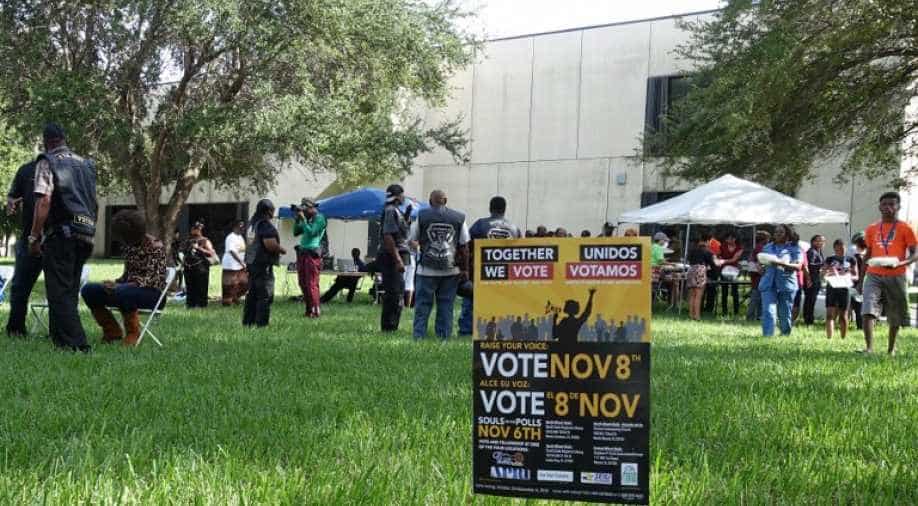 Hundreds of Hispanics and African Americans attended the 'Souls to the Polls' event on Sunday to encourage churchgoers across Florida to vote. Photograph:( AFP )

Voter turnout among African American and Hispanic voters in the United States is surging, and this swell of minority participation could spell trouble for Donald Trump's White House hopes.

On Sunday -- the last day of early voting before Election Day on November 8 -- hundreds of people attended "Souls to the Polls" events, aimed at encouraging churchgoers to vote across the key swing state of Florida.

Some came straight from morning worship, wearing three-piece suits and dresses as they made their way past dozens of campaigners hoisting signs for local candidates and urging support for solar energy and education issues.

At one event in central Miami, people held hands and prayed outside an early voting site, while at another in southern Miami-Dade County, about 20 African American men rolled in together on motorcycles.

For some, the vote they cast was as much for Democrat Hillary Clinton as it was against her Republican billionaire challenger.

"I'm scared if Trump wins," said Ines Curbelo, 57, a nurse who described herself as Afro-Cuban and was handing out Democratic flyers at a polling place Cutler Bay, south of Miami.

As speakers blared gospel and R&B music, a line formed near a smoky barbecue pit and several young boys jousted with inflatable swords on the grassy lawn behind her.

"He would set back politics and set back race relations and set back women's fight for equality in the workplace -- everything is going to get set so far back," Curbelo said.

100 per cent increase in Hispanic voters

Hispanics make up a powerful voting bloc in the battleground state of Florida, and are widely expected to lean toward Clinton, particularly since Trump has described Mexicans as rapists, repeatedly vowed to build a border wall and promised to deport masses of illegal immigrants.

As of Saturday, 565,000 Hispanics have voted in person in Florida, a 100 per cent increase over the close of early voting in 2012, according to Daniel Smith, a University of Florida professor who tracks voter turnout.

In another sign of voter enthusiasm, of the 911,000 Hispanics who have already voted this year -- whether in person or by mail -- 36 per cent did not vote in the last presidential election.

Nationwide, about 12 per cent of voters are Hispanic, or about 27.3 million people, according to Pew Research Center projections.

Four million more Hispanics are eligible to vote this year compared to 2012, and high turnout has been seen in other states such as Nevada.

"The Hispanic community is coming out," teacher Marcela Stewart, 37, told AFP at the Souls to the Polls event.

"I think as far as the black community, we need to work a little harder," she added.

"Some people are just discouraged and feel they cannot impact the election, so we want to let them know that their voices will be heard and they need to come out."

According to Tornell Jenkins, a 37-year-old student, President Barack Obama's historic victory as the first black president in 2008 "really drove the black vote."

"Now there is confusion. Some blacks feel that both parties are bad," he added, predicting that many in his community would wait for Election Day to vote.

Early last week, Smith said black turnout was "lackluster" -- at about 14 per cent of early voters -- compared to 26 per cent in 2012, the last time Obama was elected.

But that changed, after Obama made a series of appeals for black voters to support Clinton, and Clinton herself appeared at a campaign event with Beyonce and Jay-Z.

"Over the past few days, we've seen black turnout explode, with more African-Americans voting early in-person than in 2012, and we still have 'Souls to the Polls' numbers from today to add to the running total," Smith told AFP.

Mixing religion and politics on the last Sunday of early voting can be an important draw for the working class, according to Namita Waghray, an organiser with the American County of Federal, State and County Employees (AFSCME), a 1.6-million-member union that includes bus drivers, garbage collectors and more.

"In African American communities, this is when people vote," she said, recalling about 800 people came out for Souls to the Polls events in 2012 and a dozen were held statewide this year.

"The reason we partner with churches and people of faith is because they have such belief in their community."