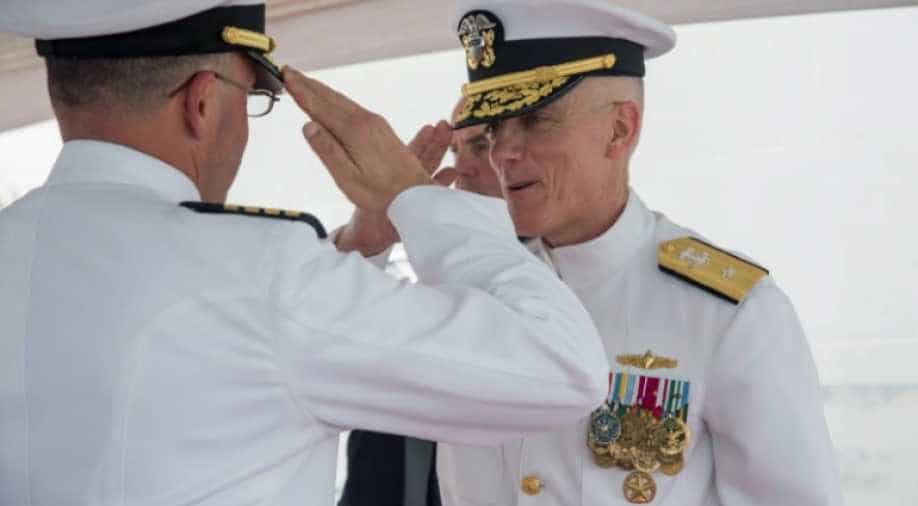 Vice Admiral Jim Malloy, commander of the US Navy`s Bahrain-based Fifth Fleet, did not say whether he would send the USS Abraham Lincoln carrier strike group into the strategic waterway off Iran, through which passes a fifth of oil consumed globally.

The commander overseeing US naval forces in the Middle East told Reuters on Thursday that American intelligence showing a threat from Iran will not prevent him from sending an aircraft carrier through the vital Strait of Hormuz if needed.

Vice Admiral Jim Malloy, commander of the US Navy`s Bahrain-based Fifth Fleet, did not say whether he would send the USS Abraham Lincoln carrier strike group into the strategic waterway off Iran, through which passes a fifth of oil consumed globally.

The group, whose deployment to the Middle East was fast-tracked by President Donald Trump`s administration as a warning to Iran, transited through the Suez Canal into the Red Sea on Thursday and was now under Malloy`s command.

"If I need to bring it inside the strait, I will do so," Malloy said in an interview by phone. "I`m not restricted in any way, I`m not challenged in any way, to operate her anywhere in the Middle East."

Iran has dismissed the US contention of a threat as "fake intelligence." Tensions have risen between Tehran and Washington since the Trump administration withdrew a year ago from a 2015 international nuclear deal with Iran and began ratcheting up sanctions to throttle the Islamic Republic`s economy. [nL2N22L1OB]

The Pentagon said it expedited Lincoln`s deployment and sent bombers to the Middle East after US intelligence signalled possible preparations by Tehran to stage attacks against US forces or interests. Malloy said the intelligence was linked "with the actual activity that we observed."

"And that was certainly enough for me ... to say that we saw this as a threat," he said.

The US officials, speaking on condition of anonymity, say one of the pieces of intelligence indicated Iran had moved missiles on boats. One of the officials said the particular missile observed was perhaps capable of launching from a small ship.

The officials also noted growing concerns about the threat from Iran-backed Shi`ite militia in Iraq, which have long avoided any confrontation with US troops under the shared goal of defeating Islamic State, a Sunni militant organization.

Malloy, whose naval forces would support efforts to defend US troops throughout the region, did not enter into details on the US intelligence. But he confirmed that some of the US concern centred on Iranian missiles.

"It might be a new fielding of technology by Iran," Malloy said, adding the weaponry "falls under the category of destabilising and offensive in nature."

`NOT IN A WAR-PLAN FOOTING`

The nuclear deal between Iran and six world powers required Tehran to curb its uranium enrichment capacity to head off any pathway to developing a nuclear bomb, in return for the removal of most international sanctions. Iran has always said it pursued a nuclear program for peaceful purposes only.

In the past month, the US designated Iran`s Revolutionary Guard (IRGC) as a terrorist organization and increased sanctions pressure, with an explicit goal of slashing Iran`s oil exports to zero.

Beyond the deployment of the Lincoln, the United States also dispatched B-52 bombers to the Middle East in response and is also weighing the redeployment of Patriot missiles after pulling several out of the region last year, officials said.

Some of Trump`s critics fear the White House is intentionally provoking Iran. Although the military sought the deployments, the announcement itself came in a statement from White House national security adviser John Bolton - a hawk on Iran policy.

Senator Tim Kaine, a Democrat, said he worried "that the Trump administration is leading us toward an unnecessary war."

Malloy, in his first interview since the IRGC designation, confirmed that US forces were operating at a heightened state of readiness. Still, Malloy stressed that the US military was not seeking or preparing for war with Iran.

"I am not in a war-plan footing and have not been tasked to do so," Malloy said. "However we are absolutely ready to respond to any aggression against the United States, partners in the region, or our interests."

Trump also reaffirmed that message on Thursday, saying he did not want conflict.

"We have one of the most powerful ships in the world that are loaded up and we don`t want to do anything," Trump told reporters.