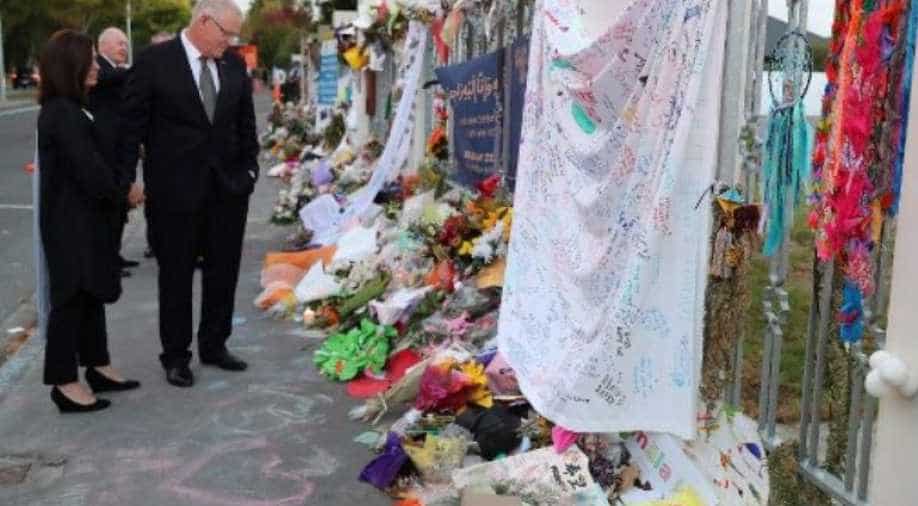 Prime Minister Scott Morrison and his wife Jenny visiting the Al Noor Mosque in Christchurch to lay a wreath and pay their respects to the victims of the twin mosque terror attack. Photograph:( AFP )

Since an Australian gunman killed 51 worshippers at mosques in New Zealand's Christchurch in 2019, the Australian Security Intelligence Organisation has said the far-right threat had "increased" and become an "enduring threat".

Sonnenkrieg Division, a UK-based neo-Nazi group, will be effectively banned in Australia once its listing as a terror group is confirmed.

After that, the outfit will become the first far-right organisation to be listed as a terror group in Australia.

The Department of Home Affairs signalled that the Sonnenkrieg Division would join the current list of 27 proscribed organisations, which have so far been exclusively jihadist or separatist groups linked to the Middle East and Central Asia.

Australia's domestic spy agency has repeatedly sounded the alarm about the growing threat of far-right violence.

Since an Australian gunman killed 51 worshippers at mosques in New Zealand's Christchurch in 2019, the Australian Security Intelligence Organisation has said the far-right threat had "increased" and become an "enduring threat".

But until now the country's conservative government has been reluctant to formally designate any organisations as terror groups.

The move means that being a member of the Sonnenkrieg Division or helping the organisation financially will be outlawed.

Home affairs minister Peter Dutton said the Sonnenkrieg Division, or SKD, had "a presence that we're particularly worried about in the UK".

"Their reach goes into the minds of young people and Australians here," he told Nine News.

Officials indicated the process of designating the group would be completed in the coming days.

Extremism experts at US-based George Washington University have described the Sonnenkrieg Division as "tiny" and an offshoot of much larger organisations.

The group did gain some notoriety in 2018 for suggesting Britain's Prince Harry -- whose wife is mixed race African-American -- was a "race traitor", leading to it being banned in Britain in February 2020.

British authorities said SKD was formed in 2018 as a splinter group of National Action, also known as the System Resistance Network.

Australia's opposition Labor party questioned why SKD -- which is believed to have only a dozen members in Britain -- was listed rather than several larger and more prominent organisations.

"They are a UK-based group that has little or no direct links to Australia," shadow home affairs minister Kristina Keneally said, calling for further designations.

Keneally said the government had "sought to dismiss, downplay or ignore the threat of right-wing extremism".

Authorities have warned that militant far-right groups are becoming more global, with ideologies being rapidly spread across borders via online message boards and other digital platforms.

In March 2020, Australia charged two men linked to the far right with attempting to obtain military equipment and plotting a terrorist act.

According to the Australian Federal Police, "the investigation also identified alleged social media links between one of these men and an individual in the United Kingdom".