Thousands protest against French bill to curb identification of police 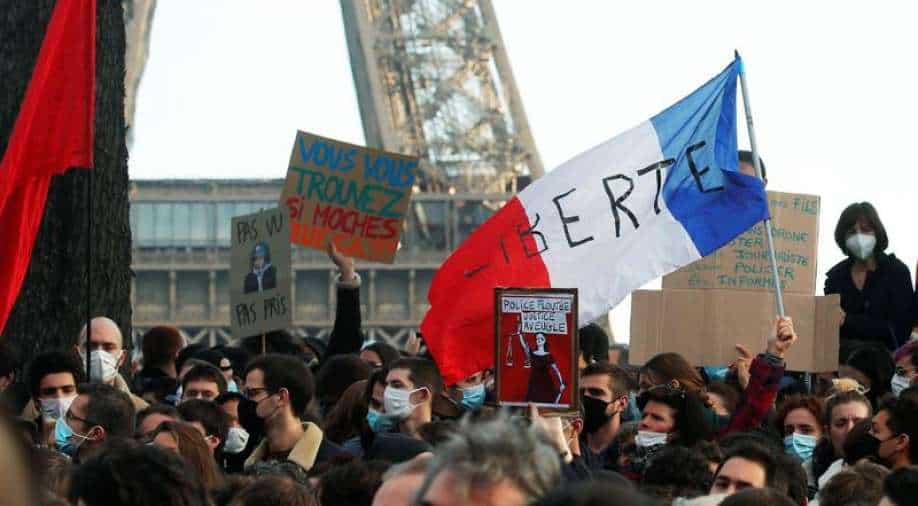 Protests in France over bill to curb identification of police Photograph:( Reuters )

In Paris, police clashed with demonstrators at the end of the protest. By 7:45 p.m., 23 people had been arrested and a police officer slightly injured, the police prefecture tweeted.

Thousands of people protested in Paris on Saturday against a bill that would make it a crime to circulate an image of a police officer's face with the intention that they should be harmed.

Supporters say police officers and their families need protection from harassment, both online and in person when off duty. Opponents, however, say the law would infringe journalists' freedom to report, and make it harder to hold police accountable for abuses such as excessive use of force - a growing public concern.

To this end, rights activists, trade unionists and journalists chanted "Everybody wants to film the police!" and "Freedom!" on the Trocadero Square in western Paris.

The police, on their part, wearing riot gear stood by around the square.

In Paris, police clashed with demonstrators at the end of the protest. By 7:45 p.m., 23 people had been arrested and a police officer slightly injured, the police prefecture tweeted.

Last Tuesday, two journalists were detained in a protest that led to clashes with police as lawmakers in the National Assembly began debating the bill, which is backed by President Emmanuel Macron's party and its parliamentary allies.

The bill passed its first reading on Friday and there will be a second reading on Tuesday. It then goes to the Senate for further debate before it can become law.

An amendment drafted by the government and approved on Friday modified the article in question, 24, to add the phrase "without prejudice to the right to inform".

Prime Minister Jean Castex said this would "remove any ambiguity on the intention to guarantee respect for public freedoms while better protecting those, police and gendarmes, who ensure the protection of the population".