Tens of thousands call for fair elections at Moscow rally 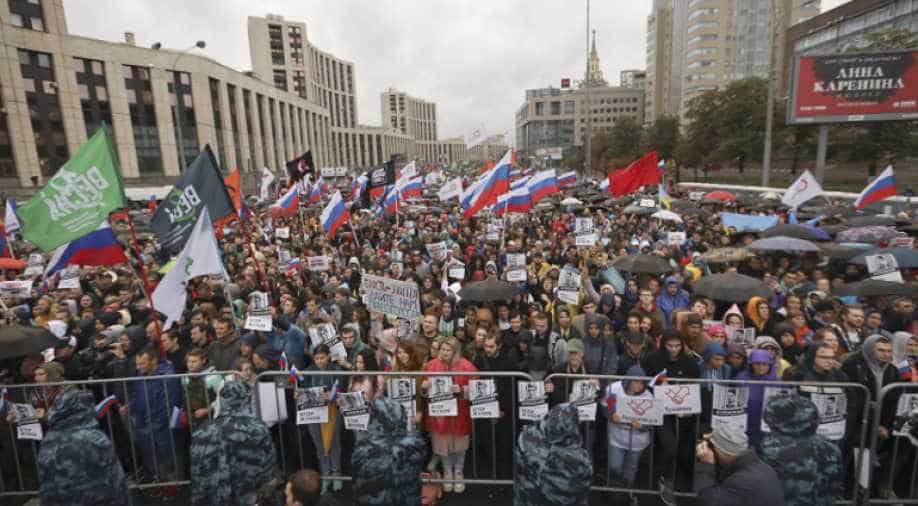 In recent weeks, thousands have attended street protests calling for free and fair elections after the exclusion of several opposition figures, including allies of top Putin critic Alexei Navalny, from local Moscow polls next month

Almost 50,000 opposition supporters rallied in Moscow Saturday at one of the largest protests since President Vladimir Putin's return to the Kremlin in 2012.

Protesters crowded the central Prospekt Andreya Sakharova street, where city authorities deployed a massive police presence, including officers in riot gear, after giving permission for the rally to go ahead.

The White Counter, an NGO that tracks participants in rallies, counted 49,900 people, while Moscow police gave a much lower attendance figure of 20,000.

In recent weeks, thousands have attended street protests calling for free and fair elections after the exclusion of several opposition figures, including allies of top Putin critic Alexei Navalny, from local Moscow polls next month.

On Saturday, some protesters carried placards with slogans such as "Give us the right to vote!" and "You've lied to us enough" while others held up pictures of activists arrested at earlier demonstrations.

"I'm outraged by this injustice at every level. They're not letting candidates stand who have collected all the necessary signatures. They are arresting people who are protesting peacefully," said one protester, Irina Dargolts, a 60-year-old engineer.

"It feels like the country is a prisoner and its citizens are hostages... No one represents the people," said Dmitry Khobbotovsky, an activist for the Open Russia movement funded by Kremlin foe and former oligarch Mikhail Khodorkovsky.

Showing the movement's appeal to young Russians, one of the country's most famous rappers, Oxxxymiron, attended the rally and another popular rapper Face performed on stage.

"I'm performing here today so that my people have freedom and the right to choose," said Face, 22, known for his facial tattoos.

Riot police and the national guard detained more than 2,000 at the previous two rallies, which were not authorised by city officials, and a dozen protesters face criminal charges of "mass disorder".

Most opposition candidates who have been banned from participating in the vote have also now been jailed for violating protest laws.

One of the rally speakers was the wife of opposition politician Dmitry Gudkov, who is serving a 30-day sentence.

"Each of us has the right to run for office and they are very afraid of that," said Valeriya Gudkova.

"We have real support from the public and they just have criminals in their electoral commissions."

While Saturday's rally was authorised, Navalny, who is currently in jail, urged supporters to walk peacefully through the city afterwards, when they would risk detention for illegal protests.

One of Navalny's associates, Boris Zolotarevsky, at the end of the rally urged protesters to go to Putin's presidential administration offices in central Moscow. He was detained by police shortly afterwards.

Moscow police and the powerful Investigative Committee issued a warning ahead of the rally saying unsanctioned protests would be "immediately halted."

Eight people were detained in Moscow at Saturday's demonstration, while 51 were detained at protests in Russia's second largest city of Saint Petersburg, according to OVD-Info, an NGO that monitors protests.

As he enters his third decade in power, Putin's approval ratings have dropped significantly and critics say the authorities fear any outlet calling for wider political change.

The latest demonstration came this week as authorities mounted their harshest attack yet on Navalny's team, focusing on his anti-corruption foundation which publishes investigations of officials close to Putin.

One of the foundation's lawyers, Lyubov Sobol, was detained Saturday morning at her campaign office by police in riot gear, she wrote on social media.

Riot police also raided the studio where Navalny's supporters were set to run a live broadcast of the protest, activists said.