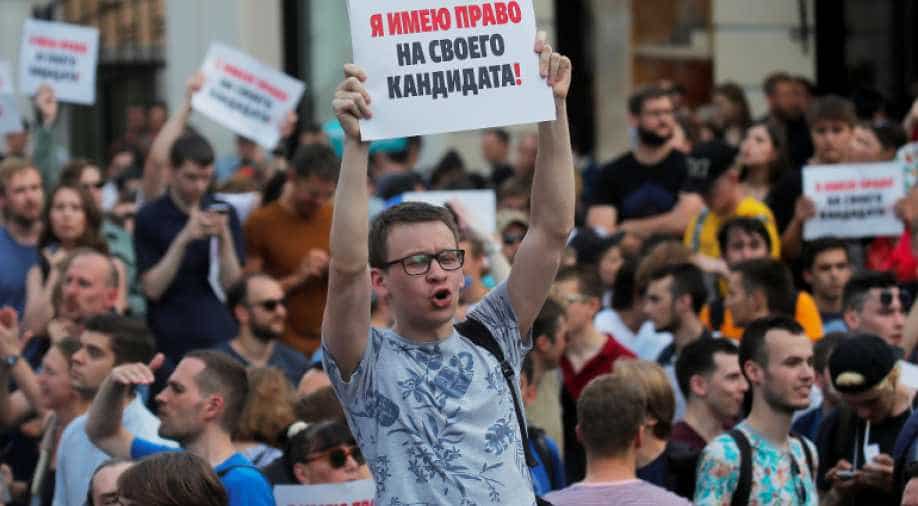 Riot police and the national guard have used more violent tactics than previously and detained more than 2,000 at the last two rallies, which were not authorised by city officials.

Russian opposition supporters plan a major protest in Moscow on Saturday after police detained thousands at recent demonstrations that have been among the largest since President Vladimir Putin's return to the Kremlin in 2012.

In recent weeks, thousands have attended street protests calling for free and fair elections after the exclusion of several opposition figures, including allies of top Putin critic Alexei Navalny, from local Moscow elections next month.

Riot police and the national guard have used more violent tactics than previously and detained more than 2,000 at the last two rallies, which were not authorised by city officials.

Most opposition candidates who have been banned from participating in the vote have been jailed for violating protest laws.

A dozen protesters including university students face criminal charges of "mass disorder" that call for lengthy jail terms, despite their supporters insisting protests were peaceful.

Saturday's rally has been authorised which means participants should not face detention for protesting at the agreed location, but Navalny, who is currently in jail, has urged supporters to walk peacefully through the city afterwards.

Moscow police and the powerful Investigative Committee issued a warning against participating in unsanctioned protests which it said would be "immediately halted."

Showing the movement's appeal to young Russians, popular electronic and rap musicians are expected to play at the rally and mainstream celebrities have announced they will attend.

One of Russia's most famous rappers, Oxxxymiron, urged his fans to go, as did a star YouTube blogger Yury Dud.

"Let's not accept it as normal when innocent people are thrown in jail or harshly beaten up by police," Dud wrote on Instagram to his 2.3 million followers.

'Attempt to gag us'

The latest demonstrations come as the authorities this week mounted their harshest attack yet on Navalny's team, focusing on his anti-corruption foundation which publishes investigations of officials close to Putin.

One of the foundation's lawyers, Lyubov Sobol, has been on hunger strike for weeks after being refused as a candidate in Moscow.

"These are all acts of political intimidation, political repression," she told journalists on Friday, condemning the criminal cases launched against activists as "fabricated and politically motivated."

As he enters his third decade in power, Putin's approval ratings have dropped significantly in recent months and critics say authorities fear any outlet calling for wider political change.

Moscow has even accused the US of encouraging people to attend protests after the embassy posted the route of a recent march along with warnings to avoid the area.

"The repressive scenario that the authorities are relying on can probably dampen down open discontent but is hardly likely to reach the root of the problem," wrote Vedomosti daily in an editorial.

"A large section of society is not represented in power."