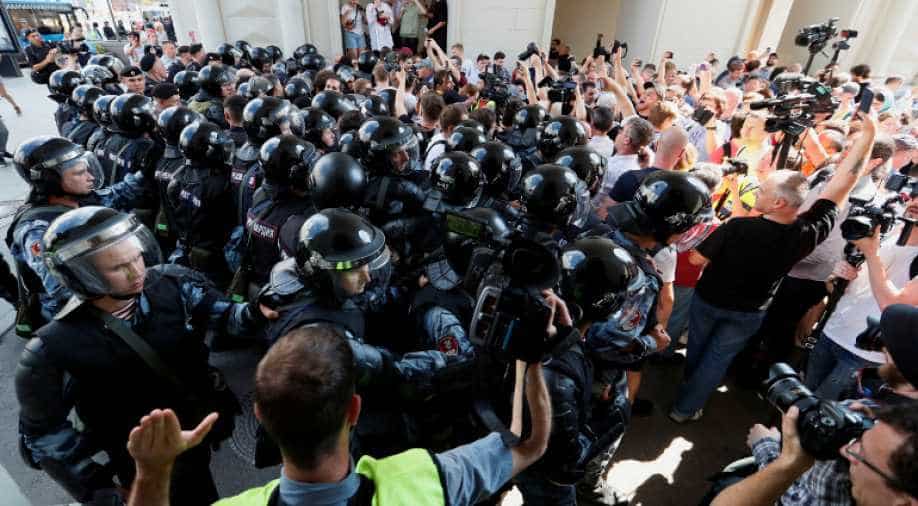 The meeting came a week after 22,000 took to the streets calling on authorities to reverse their decision ahead of the vote.

Russian police arrested almost 1,400 people as they gathered in Moscow at the weekend to demand open elections, a monitor said, the biggest crackdown on a rally in the country in years.

Some 3,500 people took part in the unauthorised protest on Saturday, according to official figures, after authorities blocked prominent opposition candidates from taking part in city elections.

The meeting came a week after 22,000 took to the streets calling on authorities to reverse their decision ahead of the vote.

Police used batons on protesters as they tried to gather outside city hall on Saturday, and AFP reporters at the scene saw demonstrators with injuries.

The EU in a statement denounced the "disproportionate use of force against peaceful protesters," which it said undermined "the fundamental freedoms of expression, association, and assembly".

Amnesty International also condemned what it said was the use of excessive force by the police.

After the rally, last week investigators raided the homes and headquarters of a number of disqualified candidates. Top Kremlin critic Alexei Navalny was jailed for 30 days for calling the fresh protest.

Several would-be candidates were detained before or during the meeting on Saturday. Among them was Ilya Yashin, who called for another protest next weekend.

OVD-Info, an organisation that monitors protests, reported Sunday that 1,373 people were detained.

It said this was the highest number since mass demonstrations in 2012 when tens of thousands protested President Vladimir Putin's return to the Kremlin after four years as prime minister.

Elections to Moscow's 45-seat legislative body, currently controlled by the pro-Kremlin United Russia party, are due to be held in September.

While pro-Kremlin candidates enjoy the support of the state, independent candidates say they have been made to jump through countless hoops in order to get on the ballot for the city polls.

Following pickets last week, including outside the local election commission building, investigators said they were launching a criminal probe into obstructing the work of election officials.