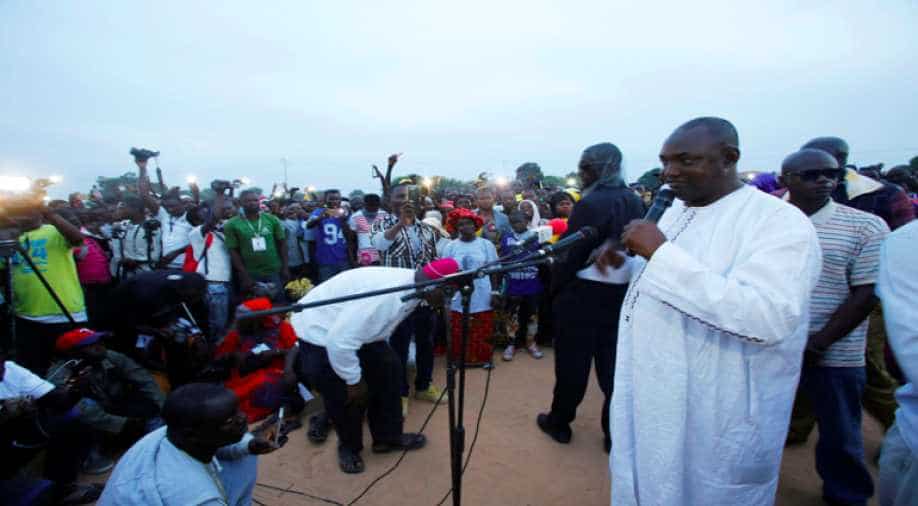 Gambia’s opposition candidate Adama Barrow on Friday hailed a “new Gambia” after pulling off a surprising election victory, putting an end to the 22-year rule of Yahya Jammeh.

Jammeh conceded defeat on television, accepting that Gambians had "decided” that he “ should take the backseat".

Barrow, a property developer and political unknown till six months back, comfortably won Thursday’s election with 45.54 per cent.

According to the Independent Electoral Commission, Jammeh took 36.66 per cent votes and third party candidate Mama Kandeh 17.80 per cent.

Gambians took to the streets to celebrate the win.

According to AFP, in Westfield, a district close to the capital, teenagers piled on top of cars, taking selfies and strumming guitars, while others waved flags coloured the grey of the opposition coalition.

Barrow was chosen as the opposition leader by a group of political parties who have joined forces for the first time and won unprecedented popular support.

Turnout was around 65 per cent.

Addressing the public on Gambian television, Jammeh congratulated Barrow for his "clear victory", adding: "I wish him all the best and I wish all Gambians the best."

"I will never cheat or dispute the election because this is the most transparent, rig-proof elections in the whole world," he added, referring to The Gambia’s unique system of voting with marbles dropped into coloured drums.

Barrow will now serve a three-year term at the head of a transition reform government.

The election made international headlines due to an internet blackout that sparked condemnation from rights groups and the United States.

A heavy deployment of security forces in Banjul earlier on Friday added to the nervousness over whether Jammeh would accept defeat, but AFP reports that by the end of the day officers were seen shaking hands with Barrow supporters.

"Never before has power changed hands (in Gambia) through the ballot box," said US State Department spokesman John Kirby acknowledging the stunning result.

"We encourage all Gambians to respect the election results and the government of Gambia to respect the rights of citizens to freely assemble as they respond to the results."

At his final campaign rally, Jammeh had warned that protests over the election result would not be tolerated, saying The Gambia "does not allow" demonstrations.