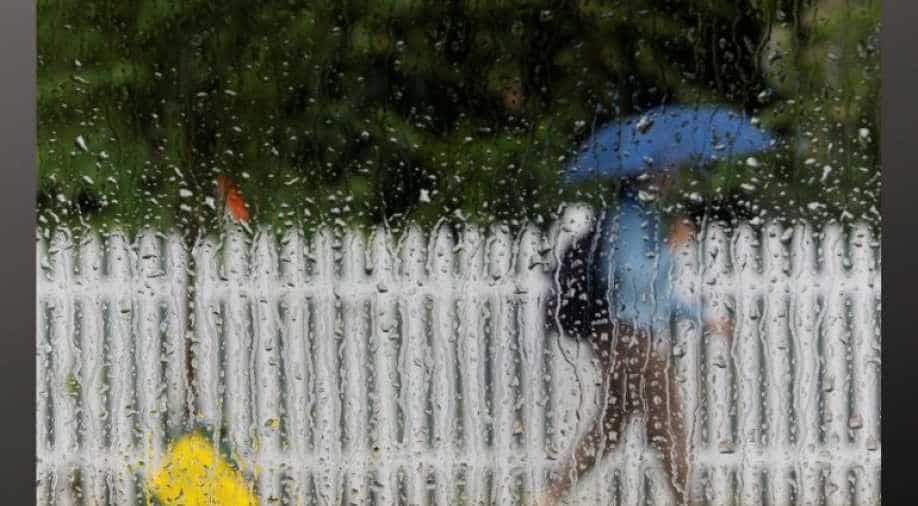 A pedestrian under an umbrella passes a rain covered car window in Boston, Massachusetts. Photograph:( Reuters )

Up to 4 inches (10 cm) of rain-drenched New York's eastern Long Island suburbs, while the widespread storm dumped as much as 8 inches (20 cm) of wetness on Port Arthur, Texas.

Severe wind and rain in the northeastern United States left thousands without power on Tuesday, as a record-breaking heatwave ebbed and a flash flood threat moved south with the storm.

Up to 4 inches (10 cm) of rain-drenched New York's eastern Long Island suburbs, while the widespread storm dumped as much as 8 inches (20 cm) of wetness on Port Arthur, Texas, said meteorologist David Roth of the National Weather Service's Weather Prediction Center.

Airlines cancelled more than 300 flights in the United States, with the most affected airports throughout the New York area as well as North Carolina, according to FlightAware.com.

"Today we are expecting the flash flood risk to shift to North Carolina, Virginia, anywhere in the Southeast as the front continues to shift southward," Roth said, noting the storm was likely to dry out by evening.

"It hits the pavement and it runs off. Asphalt is not known for absorbing water," Roth said.

Utilities were scrambling to restore electricity to hundreds of communities where torrential weather downed tree limbs, knocking out power.

Overnight, more than 600,000 customers were out in Michigan and more than 200,000 lost power in New Jersey. Utility DTE in Michigan said more than 100,000 remained out on Tuesday, but it would restore 90 per cent of all storm-related outages by the end of the day.

New Jersey's hardest hit utility, FirstEnergy, was still assessing the situation and did not have an estimated return to service time for all its customers without power.

New York City experienced its second successive weekend of blackouts after a July 13 outage left more than 73,000 homes and businesses without power for about three hours.

The weekend heatwave that blanketed about a third of the US population brought thunderstorms along with cooling rain when it burst on Monday, the National Weather Service said.

"The good news is that the heatwave is over," Oravec said. "It's cooled down."