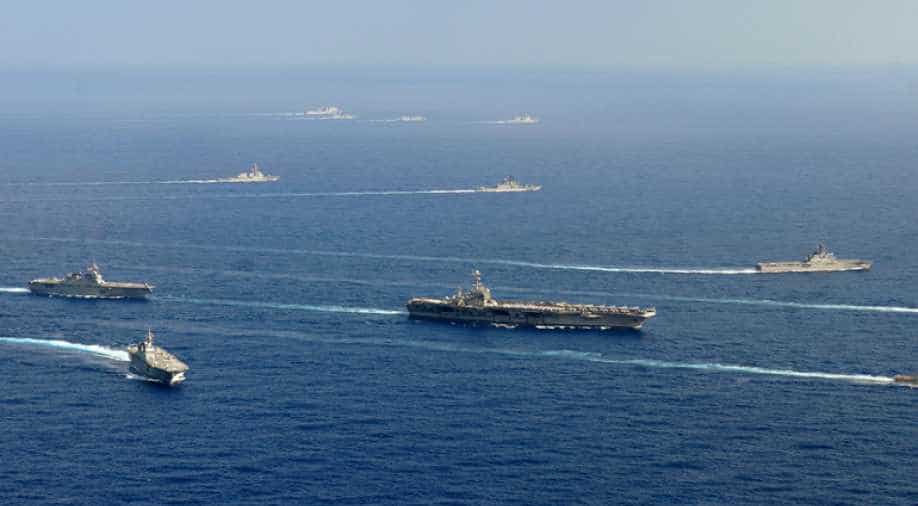 A file photo of warships in East China Sea. Photograph:( Others )

There have been reports of shocking sea burial. The fishermen were allegedly shot on board a Chinese fishing vessel off the coast of South Korea. The visuals show dead bodies being dumped into the sea with bodies of three Indonesian crew members who died on board the fishing vessel.

The South Korean media which released the images says the crew members apparently died due to excessive labour. Unpaid salaries, along with human rights violations and even violence against the fishermen have allegedly taken place. Indonesia has asked the Korean coast guard to investigate and the Chinese government has been asked to clarify.

The Indonesian foreign ministry summoned the Chinese ambassador Xiao Qian last week and questioned him on whether unsuitable conditions on board the vessel contributed to the deaths.

China said it did not. The operators of the fishing vessel argued that the sea burials were in accordance with international labour organization(ILO) rules. It said the crew members were buried at sea apparently with the approval of their families and that compensation had been given to the family members.

Meanwhile, the official website of Indonesia's state intelligence agency was recently hacked. The tool used for hacking it was called Aria-body. A tool designed by the 'Naikon' group from China which has repeatedly been used in the last five years for hacking purposes, not just in Indonesia but in Vietnam, the Philippines, Thailand, Myanmar, Brunei and even Australia.

An Israeli cybersecurity firm had uncovered the cyber espionage operation. A report was published on Wednesday which said the espionage operation is linked to the Chinese group - Naikon. The group is allegedly gathering geo-political intelligence with specific targets which include foreign ministries and government-owned companies.

It reportedly disguises its cyber attacks in emails sent to foreign embassies. China's viral aggression knows no frontiers or mediums. China is now reportedly infiltrating the security systems of nations, it considers a threat.