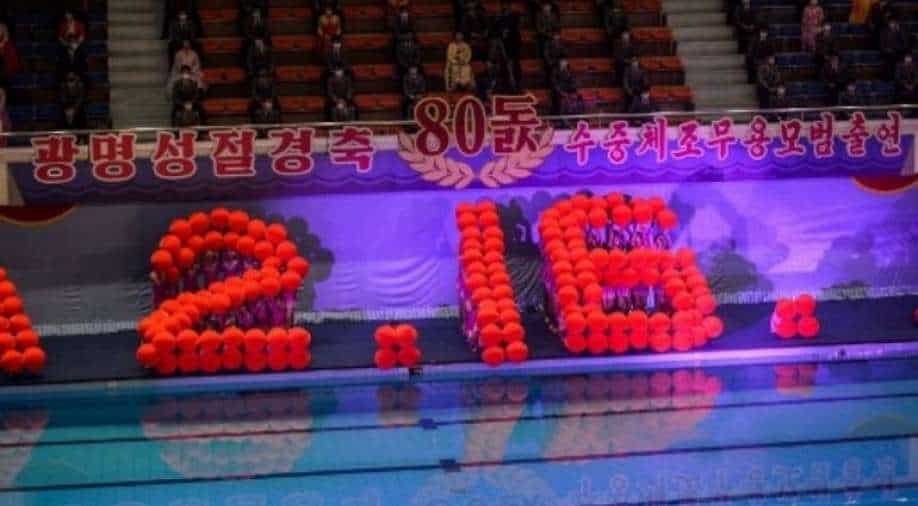 This year's anniversary has been closely watched as it comes amid fresh tensions on the peninsula. Some observers had anticipated a military parade by the North to showcase its new weapons

Kim was joined by top officials in celebrating the "Day of the Shining Star" in snowy Samjiyon, a city near Mt Paektu, where official narratives say Kim Jong Il was born in a secret guerilla camp on February 16.

The North Korean calendar is peppered with anniversaries related to the nation's official history, in particular to Kim's father and his grandfather Kim Il Sung, the country's founding leader.

The occasions are celebrated with flower shows, mass dances and laudatory tributes in state media, in what analysts say is a means to instil loyalty to the leadership.

Kim Il Sung's April 15 birthday is called the Day of the Sun.

Photos and video in North Korean state media Wednesday showed participants gathered before a giant statue of Kim Jong Il to celebrate what the official KCNA news agency called "the great auspicious holiday of the nation".

The crowd was said to have burst into "stormy cheers" at the sight of leader Kim Jong Un, who has called Samjiyon -- located along the Chinese border in Ryanggang province -- the "home of our revolution".

Kim has poured huge resources into the area's redevelopment in recent years, with the vast project including new apartments, hotels and a ski resort.

This year's anniversary has been closely watched as it comes amid fresh tensions on the peninsula. Some observers had anticipated a military parade by the North to showcase its new weapons.

Pyongyang carried out an unprecedented seven weapons tests in January, including of its most powerful missile since 2017, when leader Kim Jong Un baited then-US president Donald Trump with a spate of provocative launches.

It has also warned it could abandon its self-imposed moratorium and resume testing intercontinental ballistic missiles or nuclear weapons.

But Pyongyang appears to have paused testing during the Beijing Winter Olympics, possibly out of deference to key ally China, analysts have said.

Experts say Pyongyang could use its next key anniversary -- the 110th birthday of Kim Il Sung on April 15 -- to carry out a major weapons test.