No, Google is not buying Apple. That was a false alarm 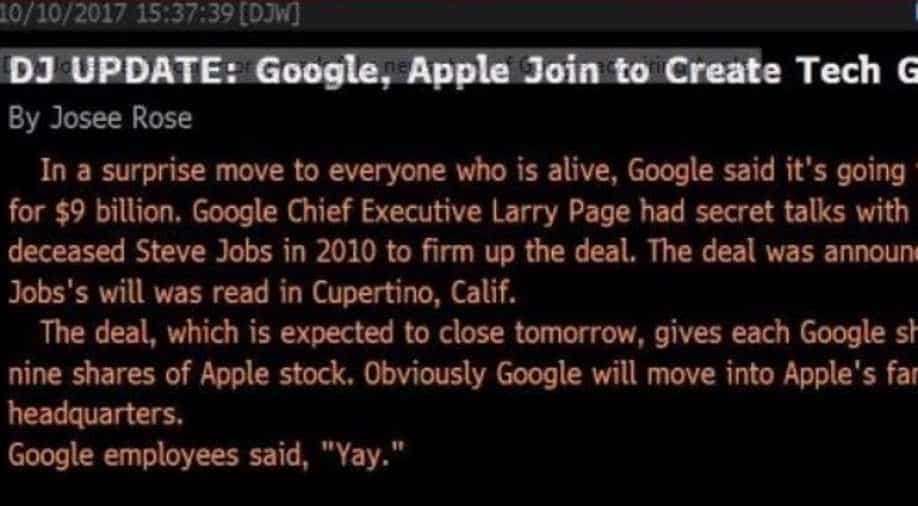 The Dow Jones story said Google was buying Apple for $9 billion, that Google CEO Larry Page had met in secret with Steve Jobs in 2010 to firm up the deal, and that the deal was announced when Jobs' will was read out. Photograph:( Others )

Google is not buying Apple.

That was a false alarm or, as it is called nowadays, "fake news".

The news though -- that Google was buying Apple for $9 billion -- was put out by the very well-respected Dow Jones newswire.

The Dow Jones newswire services the world of financial journalism and business.

The Dow Jones story read: "In a surprise move to everyone who is alive, Google said it's going to buy Apple for $9 billion."

$GOOG $AAPL by Dow Jones... I guess you guys have some explaining to do pic.twitter.com/402KaCcQJz

The story added that Google chief executive Larry Page met "in secret" with the "now-deceased Steve Jobs 2010 to firm up the deal". And that "the deal was announced when Jobs' will was read".

The story also reported, news reports said, that Google employees would take over Apple headquarters the following day, when the deal was set to close, and that they would receive 9 Apple shares for every Google share owned.

Dow Jones issued a statement later saying: "Please disregard the headlines that ran on Dow Jones Newswires between 9:34 a.m. ET and 9:36 a.m. ET. Due to a technical error, the headlines were published. All of those headlines are being removed from the wires. We apologize for the error."

But the "fake news" had already had a bit of an effect.

Apple shares had by that time risen slightly.