Mexico: We will not pay for wall 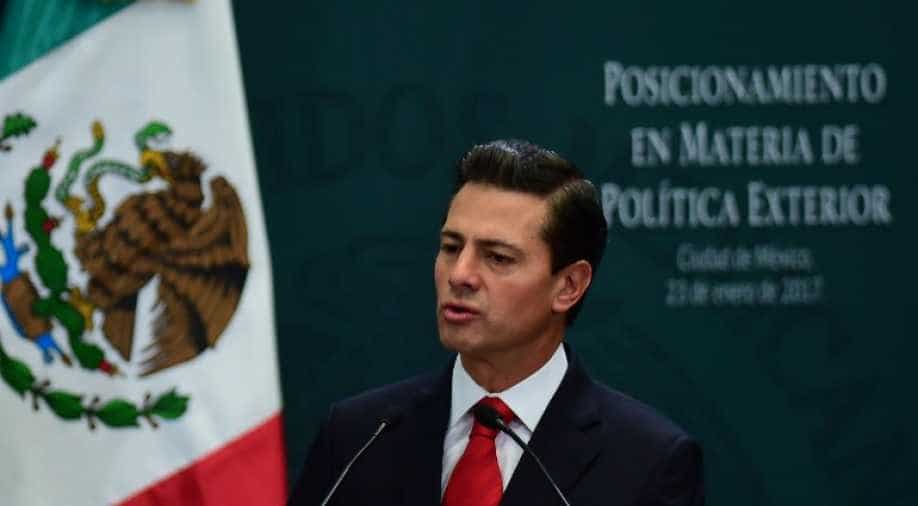 'I have said it time and again: Mexico will not pay for any wall,' Nieto said in a nationally televised address. Photograph:( AFP )

Mexican President Enrique Pena Nieto weighed on Wednesday whether to cancel a meeting with US President Donald Trump next week as he condemned the US president's decision to build a massive border wall.

Lawmakers are pressuring Pena Nieto to scrap Tuesday's talks in Washington after Trump made good on his campaign pledge to quickly order the construction of the barrier.

"I regret and condemn the decision of the United States to continue construction of a wall that, for years, has divided us instead of uniting us," Pena Nieto said in a nationally televised message.

"I have said it time and again: Mexico will not pay for any wall," he said, referring to Trump's vow to make the southern neighbour pay for the barrier.

"Mexico gives and demands respect as the completely sovereign nation that we are," Pena Nieto said.

Pena Nieto said he would wait for a report from a high-level Mexican delegation holding meetings in the US capital this week and consult with governors and lawmakers before deciding on "the next steps to take."

Foreign minister Luis Videgaray, who was in Washington, told the Televisa network that Pena Nieto will weigh whether to travel to Washington but that "the meeting stands for now."

Bad meeting
The last time Pena Nieto met with Trump, things did not go well for the Mexican leader.

Pena Nieto came under massive criticism at home for hosting the Republican billionaire during the US presidential election in August even though Trump had called Mexican migrants "rapists" and drug runners.

Videgaray resigned his post as finance minister at the time after it emerged that he had orchestrated the trip, but he was named chief diplomat after Trump was elected.

Barbosa described the wall and measures against "sanctuary" US cities that protect migrants from deportation as "acts of aggression against Mexico, against Latin America, against the world, against freedom."

Margarita Zavala, a potential 2018 presidential candidate of the conservative National Action Party (PAN), wrote on Twitter that Trump's announcement was "an affront to Mexico" and that Pena Nieto must reconsider his trip.

Other political stalwarts urged Pena Nieto to stand up to Trump during his visit.

Two-time presidential election runner-up Andres Manuel Lopez Obrador exhorted Pena Nieto to lodge a complaint against the US government at the United Nations for "violation of human rights and racial discrimination."

He said Pena Nieto should go to Washington to deliver the complaint to Trump and to "fight for freedom, not beg for it."

Trump ordered work to begin on designing and building the wall just as Mexico's foreign and economy ministers were in Washington to prepare Pena Nieto's trip. Their meetings continue on Thursday.

Videgaray said US officials insisted that Trump's wall announcement was not meant to coincide with the Mexican delegation's visit.

"They reiterated the willingness to work to reach agreements that are good for the United States and Mexico," he said.

Mexicans worry about tighter border
At the busy border crossing in the northwestern city of Tijuana, Julian Tamayo was sitting in a long line of cars with his wife and daughter to go to the US city of San Diego, where he works.

"Many of the (border) guards are very despotic and arrogant, and Trump is giving them carte blanche to be even more so," Tamayo, 49, told AFP.

Hector Renteria, a 29-year-old architecture student who was also waiting to cross the border, said the wall is not useful because migrants will "find other ways to cross" illegally.

Renteria worried that the wall will "affect traffic more and (border) checks will be stricter."