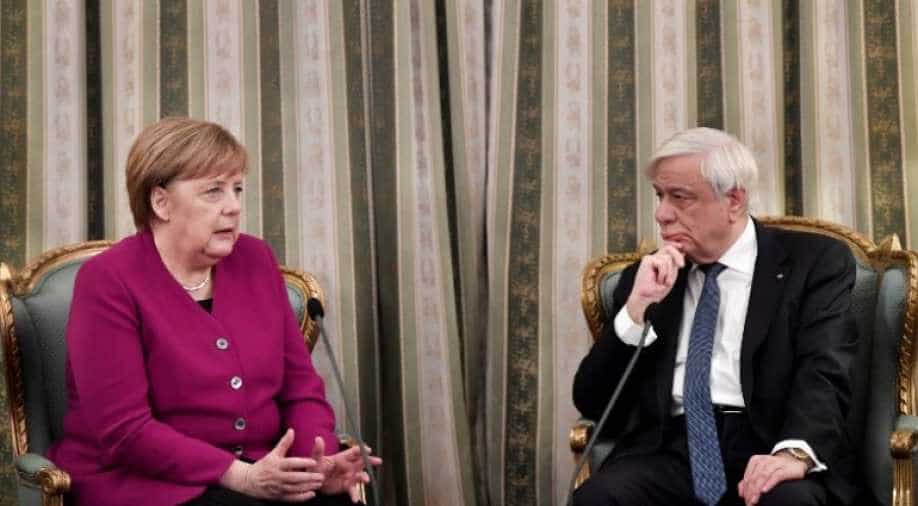 Relations between Greece and Germany have calmed since her previous visits in 2012 and 2014, which were overshadowed by angry anti-austerity rallies.

Germany "takes total responsibility for crimes committed" by the Nazis in Greece, Chancellor Angela Merkel said on Friday on a visit to Athens.

Tensions linger over wartime reparations for the Nazis' World War II occupation of Greece with Berlin arguing the issue was settled in 1960 in a deal with several European governments.

German Chancellor Angela Merkel arrived in Greece amid tight security on Thursday, as she looks to turn the page on the biting austerity measures that sparked major protests during her last official visit to Athens in 2014.

Nearly 2,000 police personnel were deployed to supervise Merkel's visit and authorities have banned demonstrations around the home of Prime Minister Alexis Tsipras, where the two leaders are set to meet.

Relations between Greece and Germany have calmed since her previous visits in 2012 and 2014, which were overshadowed by angry anti-austerity rallies.

But small protests by leftist parties and neo-Nazi groups were expected outside the no-go zone, while a police source said the authorities had opened an inquiry into five envelopes containing "a powder of unknown origin", which were sent to regional universities this week.

Merkel's visit is seen as a chance to leave behind a fraught period caused by tough German demands for Greek austerity accompanying EU bailouts for the country during the eurozone sovereign debt crisis.

Greece, which left eight years of bailout programmes behind last year, has also been deeply affected by the European migrant crisis in recent years.

Ahead of the trip, Merkel's spokeswoman Martina Fietz said she and far-left leader Tsipras would discuss "European and international" issues.