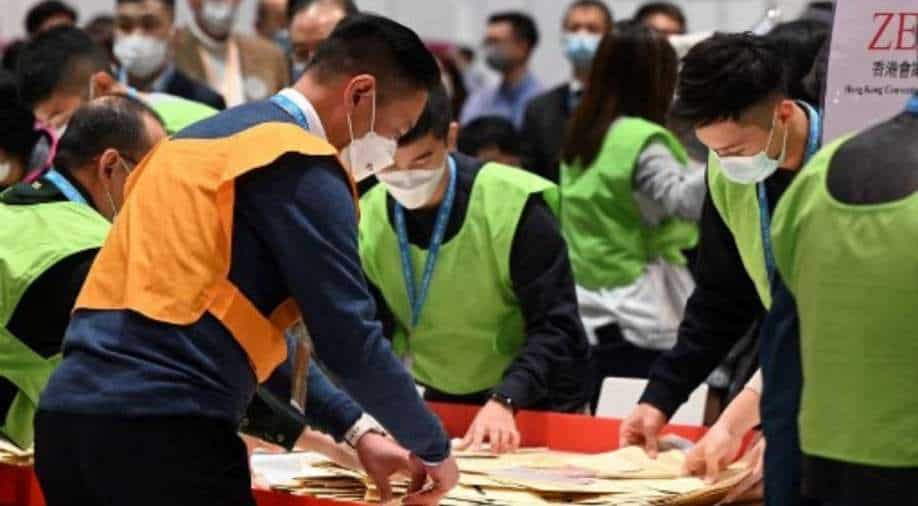 Turnout was low on Sunday as Hong Kongers cast ballots for city lawmakers under Beijing's new "patriots only" rules which drastically reduce the number of directly elected seats and control who can run for office.

It is the first legislature poll under the new political blueprint China imposed on Hong Kong in response to massive and often violent pro-democracy protests two years ago.

All candidates have been vetted for their patriotism and political loyalty to China and only 20 of the 90 legislature seats are being directly elected.

The largest chunk of seats -- 40 -- are being picked by a committee of 1,500 staunch Beijing loyalists.

The remaining 30 are chosen by reliably pro-Beijing committees that represent special-interest and industry groups.

The latest figures released by authorities showed only about 1.3 million people -- 29 percent of the electorate -- had cast their votes by 9:30 pm.

Those numbers appear set to be the lowest turnout since Hong Kong's 1997 handover to China.

"Most pro-democracy voters decided to stay away, to express their disapproval of this kind of election by not turning up," he told AFP

Final turnout figures are expected in the coming hours and counting the ballots will go into the night.

"(Lam) said this was an improvement of the electoral system, but in reality, it stripped Hong Kongers of their right to vote," activist Chan Po-ying told reporters.

The government bought up newspaper front pages and billboards, sent flyers to every household, pinged mobile phones with reminders to vote and made public transport free for the day.

But the publicity blitz and appeals appear to have done little to persuade residents in a city where dissent has been criminalised by a sweeping national security law.

An accountant in her 20s, who gave her name as Loy, said she had no plans to use her ballot.

"My vote won't mean anything because ultimately it's Beijing's people winning," she told AFP.

But Daniel So, a 65-year-old who works in technology, was among the first queuing at a polling centre in the wealthy Mid-Levels district.

"The young people are not so interested in this election because they are misled by foreign politicians and media," he told AFP. "China is doing so great now."

Lam has sought to manage expectations, telling state media last week that a low turnout could indicate "the government is doing well and its credibility is high".

Before voting on Sunday, she told reporters she "had not set any target" for turnout.

Independent polling places her public approval rating at around 36 percent.

Sunday's election has received vocal backing from Beijing, which sees the new system as a way to root out "anti-China" elements and restore order in a legislature freed from a disruptive opposition.

Hong Kong chief secretary John Lee said Sunday that  who were excluded from the poll "are those traitors who will not be acting for the overall good of Hong Kong".

Critics counter that authoritarian China has all but banned opposition parties in a city that once boasted a rambunctious political scene.

Dozens of prominent opposition figures -- including many democrats who won seats in the previous election -- have been jailed, disqualified or have fled overseas.

"People do not want to vote for a rubber-stamp chamber and pretend everything is all right," Nathan Law, a former lawmaker now living in Britain who is wanted by Hong Kong authorities, tweeted Sunday.

Hong Kongers are allowed to cast blank ballots or not vote.

But earlier this year, authorities made it a crime to "incite" others to boycott elections or cast blank or spoiled ballots.

Authorities have arrested 10 people under this law so far, mostly for social media posts.

They have also issued arrest warrants for activists overseas who have called for a boycott.