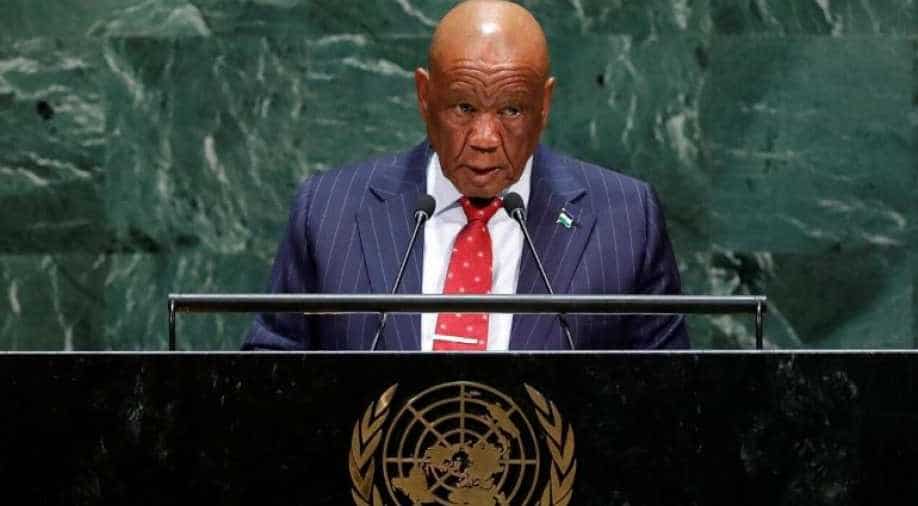 The law means that in the event of a vote of no confidence against Thabane passing, he would have no choice but to leave office.

The king of Lesotho, Letsie III, has assented to legislation that prevents Prime Minister Thomas Thabane from dissolving parliament and calling an election in the event of a vote of no confidence against him, the attorney general said on Thursday.

Thabane, 80, has been under pressure to resign over a murder case in which he and his wife are suspected of killing his previous wife. They both deny the charges.

"The ninth amendment (to the constitution) is now a law given that His Majesty has assented to it. It`s already effective, just awaiting printing," Attorney General Haae Phoofolo told Reuters.

The law means that in the event of a vote of no confidence against Thabane passing, he would have no choice but to leave office.

Thabane has previously said he will leave at the end of July, but his opponents say that is not soon enough.

In a statement on Thursday, Thabane reiterated that he had voluntarily decided to vacate office due to his age as he was no longer "energetic".

"I have always been consistent that it is my wish to retire from office by 31st of July, or earlier date of the 12th June 2020, if all necessary conditions of my retirement are put in place," he said.

Thabane said the amendment was a significant step leading up to his retirement.

"Government and the political party that I lead, will coordinate the process of my retirement maturely and to ensure the continued stability of Lesotho," he said.

"I hope that all the preparations will be finalised as soon as possible and ahead of the deadline that I have set for myself."

Thabane`s lawyers have previously argued that being prime minister should give him immunity from prosecution, but it is unclear whether or not that was part of negotiations for his departure from office.

Lesotho, which is surrounded by South Africa, has experienced several coups since gaining independence from Britain in 1966.