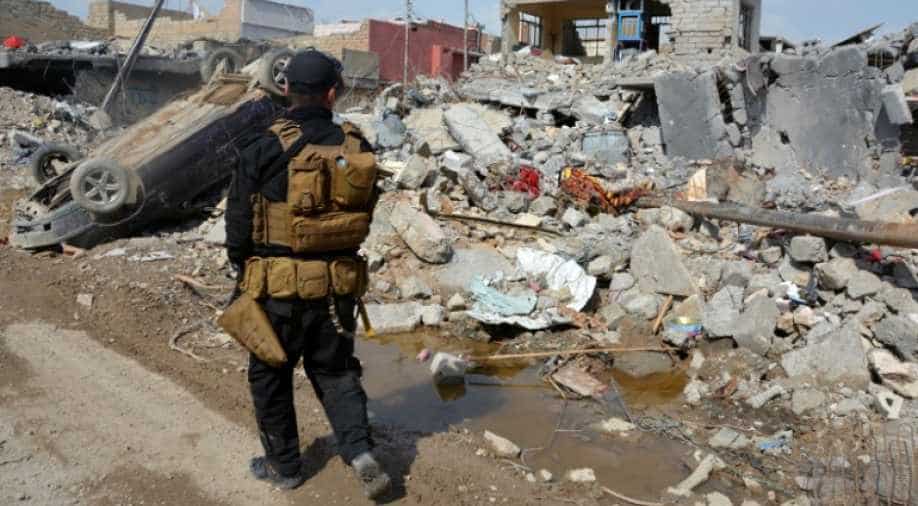 A member of the Counter Terrorism Service (CTS) walks at the site after an air strike attack against Islamic State. Photograph:( Reuters )

Ayad al-Jumaili, believed to be a deputy of Islamic State leader Abu Bakr al-Baghdadi, was killed in an air strike on Friday, an Iraqi intelligence spokesman said on Saturday.

The US-led anti-Islamic State coalition said it was unable at the moment to confirm the information that was reported earlier in the day by Iraqi state-run TV.

Jumaili was killed with other Islamic State commanders in a strike carried out by the Iraqi air force in the region of al-Qaim, near the border with Syria, a military intelligence spokesman told Reuters.

"The air force's planes executed with accuracy a strike on the headquarters of Daesh in al-Qaim .. resulting in the killing of Daesh's second-in-command...Ayad al-Jumaili, alias Abu Yahya, the war minister," state TV said earlier, citing a statement from the directorate of military intelligence.

Iraqi forces, backed by a US-led coalition, have been battling since October to retake the city of Mosul, Islamic State's last major stronghold in Iraq and the city where Baghdadi declared a caliphate nearly three years ago.

Nearly 290,000 people have fled the city to escape the fighting, according to the United Nations.

US  and Iraqi officials believe Baghdadi has left operational commanders with diehard followers to fight the battle of Mosul, and is now hiding out in the desert with senior commanders.

A separate battle is in preparation in Syria to drive Islamic State from its stronghold there, the city of Raqqa.

The Iraqi state TV report is the first by an official media to announce the death of Jumaili, who was an intelligence officer under Saddam Hussein, the Iraqi president toppled in the 2003 US-led invasion.

Although the loss of Mosul would effectively end Islamic State's territorial rule in Iraq, US and Iraqi officials are preparing for the group to go underground and fight an insurgency like the one that followed the US-led invasion.

The last official report about Baghdadi was from the Iraqi military on Feb. 13. Iraqi F-16s carried out a strike on a house where he was thought to be meeting other commanders, in western Iraq, near the Syrian border, they said in a statement.

More than 40 leading members of the group have been killed in coalition air strikes, according to experts. Baghdadi has not officially appointed a successor.