Iraqi forces on verge of retaking Mosul's Old City from IS 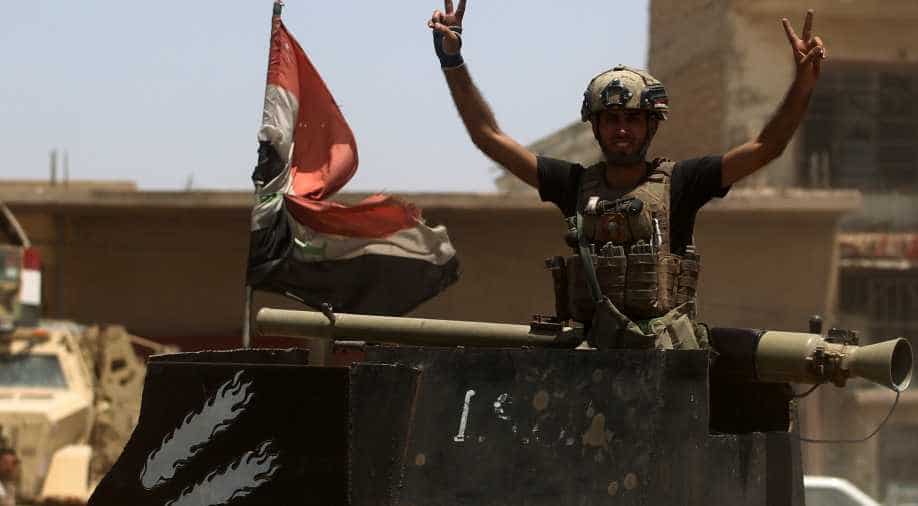 An Iraqi forces member flashes the sign for victory as he patrols on a tank in the Old City of Mosul. Photograph:( AFP )

Special forces have recaptured more of Mosul's historic heart as they press the final stages of an assault to drive the Islamic State group from Iraq's second city, the military said Sunday.

More than eight months since the country's forces launched a gruelling operation to retake Mosul, IS has gone from fully controlling the city to holding a few neighbourhoods on its western side.

Counter-terrorism forces liberated the Makawi area of the Old City, the joint operations command announced Sunday, in a further blow at the heart of the jihadists' cross-border "caliphate".

Iraqi forces have been closing in on the Old City for months, but its narrow streets and closely spaced buildings combined with a large civilian population made for an extremely difficult fight.

Security forces recaptured a series of nearby districts, cornering the jihadists, before launching an assault inside the Old City on June 18.

They have since made significant progress.

On Saturday, officers announced the recapture of a hospital and its surroundings north of the Old City, removing a nearby but unconnected pocket of IS resistance.

Interior ministry forces recaptured the Ibn Sina hospital along with other medical facilities including a blood bank and a clinic, Staff Lieutenant General Abdulamir Yarallah said in a statement.

IS has occupied several of Mosul's hospitals during the battle for the city.

Some security personnel have complained that restrictions on using heavy weapons against hospitals, intended to protect the facilities, have made operations riskier and more time-consuming.

"Our forces are advancing from three sides and are pursuing the terrorist groups in the few remaining areas of the Old City," Jawdat said in a statement.

On Thursday, Iraqi forces retook the remains of the Grand Mosque of al-Nuri in their greatest symbolic victory since the battle began.

IS chief Abu Bakr al-Baghdadi gave a triumphal sermon at the mosque after the jihadists captured Mosul in 2014, calling on Muslims to obey him.

The jihadists made sure that the Nuri mosque was not captured intact, blowing it up along with its famed leaning minaret -- known affectionately as "Al-Hadba" (The Hunchback) -- as Iraqi forces closed in.

IS claimed on its Amaq propaganda agency that the site was hit in a US air strike, but the US-led coalition said it was the jihadists who had "destroyed one of Mosul and Iraq's great treasures".

Even though it lies in ruins, the mosque's recapture has provided a boost to Iraq's forces and its government. Prime Minister Haider al-Abadi declared that the jihadists' "caliphate" was coming to an end.

The following day, a senior Iraqi commander said victory in Mosul would be declared within the "next few days."

IS overran large areas north and west of Baghdad in 2014, but Iraqi forces backed by US-led coalition air strikes have since regained much of the territory they lost.

The recapture of Mosul will not however mark the end of the war against IS.

The jihadist group still holds territories in both Iraq and neighbouring Syria, where it has been able to carry out attacks in government-held areas.

IS militants and "lone wolf" attackers inspired by the group's ideology have also carried out multiple operations overseas.