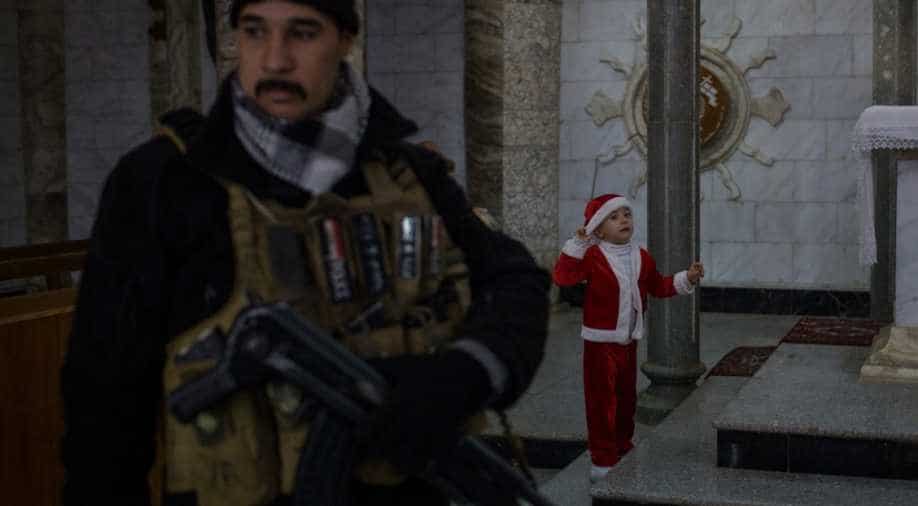 A young boy dressed in a Santa outfit plays with his hat as a member of the Iraqi army stands guard before the start of Christmas Day mass at Mar Hanna church in Qaraqosh on December 25, 2016 in Mosul, Iraq. Photograph:( Getty )

Iraqi forces punched into eastern Mosul after the massive operation to recapture the northern city from the Islamic State (IS) group was launched on October 17, but progress slowed to a crawl.

Mosul, now the last Iraqi city in which IS still holds significant territory, is split by the Tigris River, with the east side referred to as the left bank and the west as the right.

"Now our forces clashed with the enemy and there is resistance," he said, adding that forces on the northern and southern fronts were also advancing.

Iraqi forces north and south of Mosul had so far remained outside the city, with the brunt of the fighting inside it being carried out by the CTS.

IS overran large areas north and west of Baghdad in 2014, but Iraqi forces backed by US-led air strikes have since regained much of the territory they lost to the jihadists.

Iraqi Prime Minister Haider al-Abadi had pledged that Mosul would be recaptured by year's end -- a goal that is now out of reach, as operations in western Mosul have yet to begin.

Abadi also said earlier this week that three months were needed to eliminate IS in Iraq.