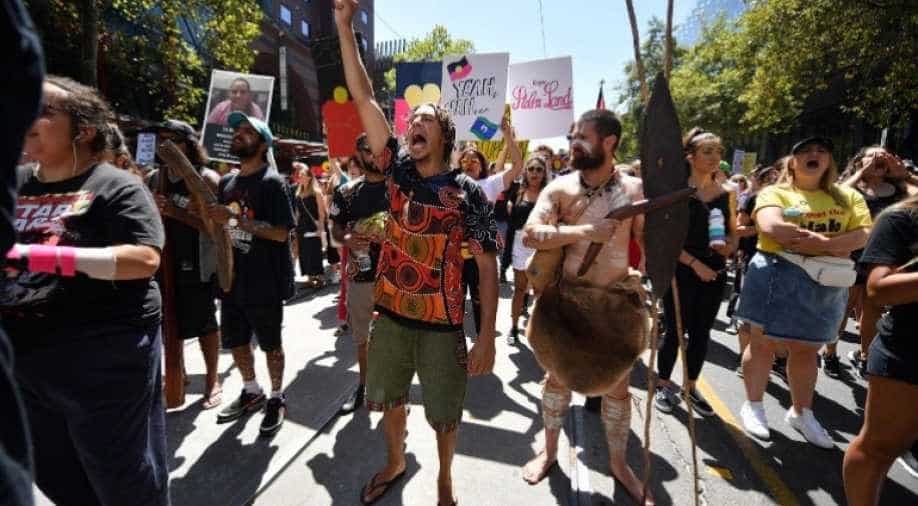 The annual January 26 Australia Day holiday commemorates the arrival of the first British settlers in 1788.

Thousands of Australians attended "Invasion Day" rallies across the country on Saturday calling for a rethink of national day celebrations they say are disrespectful to indigenous people.

The annual January 26 Australia Day holiday commemorates the arrival of the first British settlers in 1788, but for many Australians it marks the beginning of colonial oppression of Aboriginal people.

Several thousand joined the annual march in Melbourne Saturday chanting "Always was, always will be Aboriginal land", and holding placards stating "Australia is a crime scene".

Thousands more joined similar demonstrations in major cities around the country, calling for a change of date, or for the day to be abolished altogether.

Divisions have deepened in recent years with increasing calls to change the date.

Amid the heightened sensitivities this week Prime Minister Scott Morrison announced government funding of a voyage to mark the 250th anniversary of explorer Captain James Cook's first journey to Australia.

Canberra pledged about $6.5 million to a circumnavigation of Australia in a replica of Cook's ship, the Endeavour, which in 1770 brought the British into contact with eastern Australia and foreshadowed the colonisation of the continent.

The story of Cook's voyage and his "discovery" of territory declared New South Wales on the east coast has stirred debate in Australia, with Aboriginal people inhabiting the land for more than 60,000 years before the first European explorers arrived.

Meanwhile, the uncovering this week in London of the remains of British explorer Matthew Flinders, who is credited as the first to circumnavigate the Australian continent in 1802-1803, has also added to the controversy.

An aboriginal aide to Flinders named Bungaree has been largely eclipsed by his British captain, but historians now believe he played a crucial role in success of the voyage.

Morrison, who has resisted calls to change the date, said Saturday Australia cannot "walk away" from its past.

"Australia is the story of being overcome, to be able to see the better nature of Australians and the values we hold together, all races, all peoples, all cultures, all religions, all languages even," he told reporters.

Aboriginal people remain the most disadvantaged Australians, with higher rates of poverty, ill-health and imprisonment than any other community.

Australia Day is also celebrated across the county, with picnics, traditional Aboriginal performances and citizenship ceremonies, where more than 16,000 new Australians pledged their commitment to the nation Saturday.