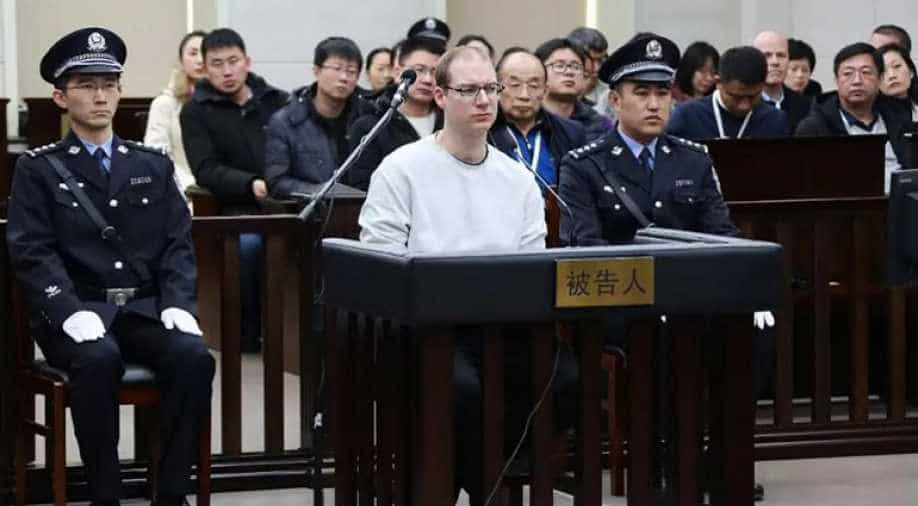 Robert Lloyd Schellenberg is a convicted drug smuggler who had been sentenced to 15 years in prison. Then, after Canada arrested Huawei CFO Meng Wanzhou, China retried Schellenberg and this time sentenced him to death.

China on Tuesday vociferously defended a court's decision to impose the death penalty on a convicted Canadian drug smuggler, escalating a diplomatic row that experts say has descended into a high-stakes game of "hostage politics".

Beijing and Ottawa have been squabbling since last month when Canada arrested the chief financial officer of top Chinese telecom company Huawei on a US extradition request related to Iran sanctions violations.

In a move observers see as retaliation, Chinese authorities detained two Canadian citizens — a former diplomat and a business consultant — on suspicion of endangering national security.

Then authorities revisited the little-known case of Schellenberg, who was sentenced to 15 years in prison in November for drug offences.

A month later, an upper court took up his appeal and ordered a hasty retrial in the northeastern city of Dalian after ruling that the punishment was too lenient.

The timing and swiftness of Schellenberg's sentence and the inclusion of new evidence presenting him as a key player in a plan to ship 222 kilogrammes (490 pounds) of methamphetamine to Australia raised suspicion among observers.

"Playing hostage politics, China rushes the retrial of a Canadian suspect and sentences him to death in a fairly transparent attempt to pressure Canada," Human Rights Watch executive director Kenneth Roth said in a tweet.

"The Chinese government is not even trying to pretend that there was a fair trial here," he said.

Ottawa had issued a new travel advisory urging citizens to "exercise a high degree of caution in China due to the risk of arbitrary enforcement of local laws".

Beijing issued a similar response hours later, calling on Chinese citizens to "travel cautiously" after a Chinese citizen was "arbitrarily detained on the basis of a request of a third-party country", an apparent reference to Meng's arrest.

The court in Liaoning said on Tuesday its actions were "in compliance with the provisions of the Criminal Procedure Law", the state-run Legal Daily reported.

China executes one or two foreigners every year —nearly all for drug offences, according to John Kamm, director of the US-based Dui Hua Foundation rights group.

Experts said retrials are rare in China, especially ones calling for a harsher sentence, but rights groups note that courts are not independent and can be influenced by the ruling Communist Party.

The rare decision to allow three foreign journalists, including one from AFP, to attend the hearing makes it "clear that the Chinese government wants (the) international spotlight on this case".

"The timing is suspect and certainly his nationality makes it all the more glaring," she said.

Schellenberg, who claimed he was innocent and framed by an acquaintance, has 10 days to appeal to the same high court that rejected his first appeal.

Lewis said the court was likely to confirm the sentence and the case would move up to the Supreme People's Court.

The top court could confirm the death penalty, give him a two-year suspended death sentence that would be converted into a long prison term or reduce his punishment, she said.

Clarke said: "My prediction is that the Supreme People's Court will sit on the review decision for as long as Meng's fate remains undetermined."

The fate of the other two Canadians, who have been held in undisclosed locations, remains a mystery.

Meng, meanwhile, was granted bail by a Canadian court last month, allowing her to wait for the US extradition hearing in a Vancouver house.

Beijing on Tuesday repeated its calls for her immediate release, calling on Canada to correct its "severe mistake".