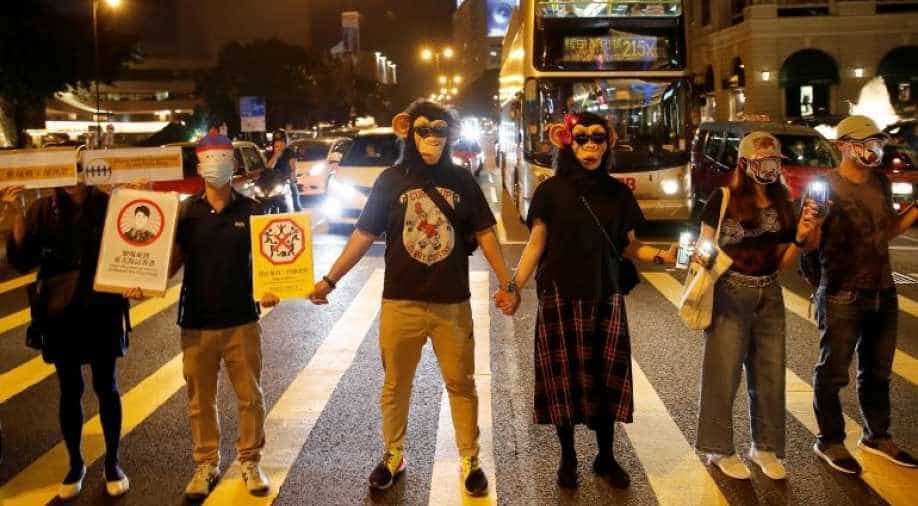 Large crowds of Hong Kongers defied a police ban and began an illegal march on Sunday, their numbers swelled by anger over the recent stabbing and beating of two pro-democracy protesters.

But thousands joined the unsanctioned rally regardless as the movement tries to keep up pressure on the city's pro-Beijing leaders after nearly five months of rallies and political unrest.

Tensions were already running high before the march was banned. On Wednesday night the leader of the group organising the weekend rally, Jimmy Sham, was hospitalised by men wielding hammers.

Then on Saturday night a man handing out pro-democracy flyers was stabbed in the neck and stomach.

Footage posted on social media showed the alleged assailant shouting shortly after the knife attack: "Hong Kong is part of China... (You) messed up Hong Kong".

"If we don't come out tomorrow, then violence will prevail and escalate: the violence inflicted by the regime, the police and local triads," he told reporters Saturday.

Vigilante violence has mounted on both sides of the ideological divide.

In recent weeks pro-democracy supporters have badly beaten people who vocally disagree with them -- although those fights tend to be spontaneous outbursts of mob anger during protests.

In contrast, pro-democracy figures have been attacked in a noticeably more targeted way, with at least eight prominent government critics, including politicians, beaten by unknown assailants since mid-August.

Protesters have labelled the attacks "white terror" and accused the city's shadowy organised crime groups of forming an alliance with Beijing supporters.

Beijing has denounced the protests as a foreign-backed plot and condemned attacks on those voicing support for China.

But it has remained largely silent on the attacks carried out against pro-democracy figures.

Security was ramped up ahead of Sunday's march with key subway stations near the gathering shuttered early and a ring of steel thrown up around a nearby terminus for high-speed trains to mainland China.

Hong Kong has been battered by 20 weeks of pro-democracy protests which have seen millions peacefully take to the streets.

But there have also been increasingly violent clashes between riot police and smaller groups of hardcore activists.

With no political solution in sight, the clashes have intensified each month.

The rallies were triggered by a now-abandoned plan to allow extraditions to the authoritarian mainland. But they morphed into wider calls for democracy and police accountability after Beijing and local leaders took a hard line.

Protesters are demanding an independent inquiry into the police, an amnesty for those arrested and fully free elections, all of which have been rejected by Beijing and Hong Kong's unelected leader Carrie Lam.

The decision set off a new wave of protests and vandalism that shut down much of the city's transport network.

In the last fortnight, the clashes have become less intense with the city's subway closing each night at 10pm.

But protests have continued with many defying the mask ban during "flashmob" rallies.

On Friday night thousands gathered outside subway stations in an array of face masks while on Saturday night hundreds of mostly masked protesters held a prayer vigil in the commercial district.