Honduran migrant 'caravan' crosses into Mexico, marches on towards US 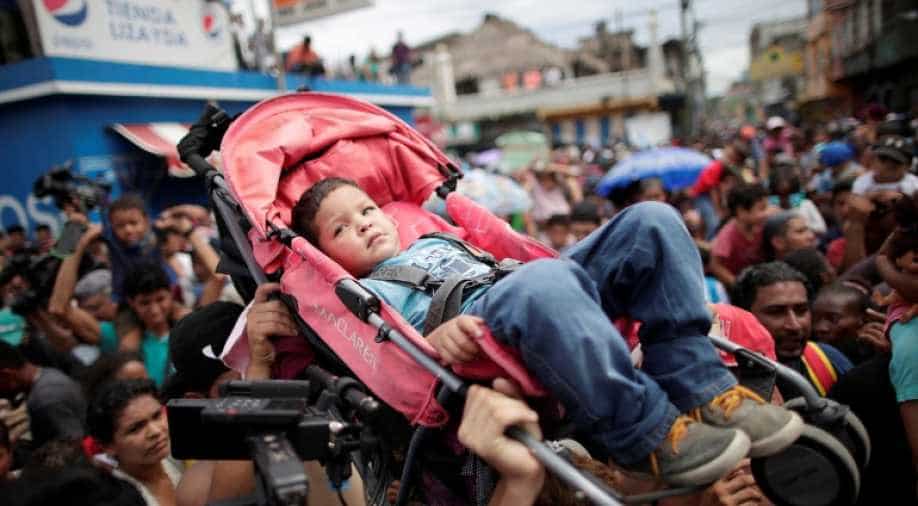 'No one is going to stop us, after all we've gone through,' said 21-year-old Aaron Juarez, who was accompanied by his wife and baby and was walking with difficulty because of an injury. Trump has asked repeatedly for the caravan to be stopped.

Thousands of Honduran migrants whose journey toward the United States has triggered a series of tirades from Donald Trump resumed their long march Sunday after crossing a river into Mexico.

Mexican authorities on Thursday had managed to block the "caravan" of migrants on a border bridge between Mexico and Guatemala, but many later crossed a river below using makeshift rafts -- regrouping early Sunday to march north.

"No one is going to stop us, after all we've gone through," said 21-year-old Aaron Juarez, who was accompanied by his wife and baby and was walking with difficulty because of an injury.

"We are tired, but very happy, we are united and strong," added Edwin Geovanni Enamorado, a Honduran farmer who was part of the caravan, who said he was forced to leave his country because of intimidation by racketeering gangs.

On Sunday morning, about a thousand migrants, including women and children, were still stranded on a border bridge hoping to enter Mexico legally via Guatemala.

Mexican authorities insisted those on the bridge would have to file asylum claims one at a time in order to enter the country.

The authorities opened the border to women and children who were then taken to a shelter in the city of Tapachula, about 40 kilometres (25 miles) from Ciudad Hidalgo, Mexico.

Rafting the River
Throughout Saturday, around 900 migrants -- tired of waiting on the bridge -- resorted to crossing the Suchiate River below on makeshift rafts and police did not intervene as they clambered up the muddy riverbank on the Mexican side.

They are now heading to Tapachula, the next stop on a journey of at least 3,000 kilometers to the border between Mexico and the United States.

The caravan has triggered escalating anti-immigrant rhetoric from US President Donald Trump on Twitter.

He has threatened to cut aid to the region, deploy the military and close the US-Mexican border if authorities did not stop the migrants.

At a rally on Saturday, he suggested the caravan was politically motivated.

"The Democrats want caravans, they like the caravans. A lot of people say 'I wonder who started that caravan?'" he said in Elko, Nevada, where the caravan has become an issue in the upcoming US mid-term elections.

Before the march resumed, he thanked Mexican authorities on Saturday for their efforts to block it.

"This migration has political motivations," said Morales, "which is violating the borders and the good faith of the states and of course putting at risk the most important thing, people."

"Without a doubt, we have a lot to do so that our people can have opportunities in their communities," he said.

Guatemala has organized a fleet of buses to take Hondurans back to their country and by late Saturday 300 people had returned.

The migrants are generally fleeing poverty and insecurity in Honduras, where powerful street gangs rule their turf with brutal violence.

With a homicide rate of 43 per 100,000 citizens, Honduras is one of the most violent countries in the world, according to a Honduran university study.