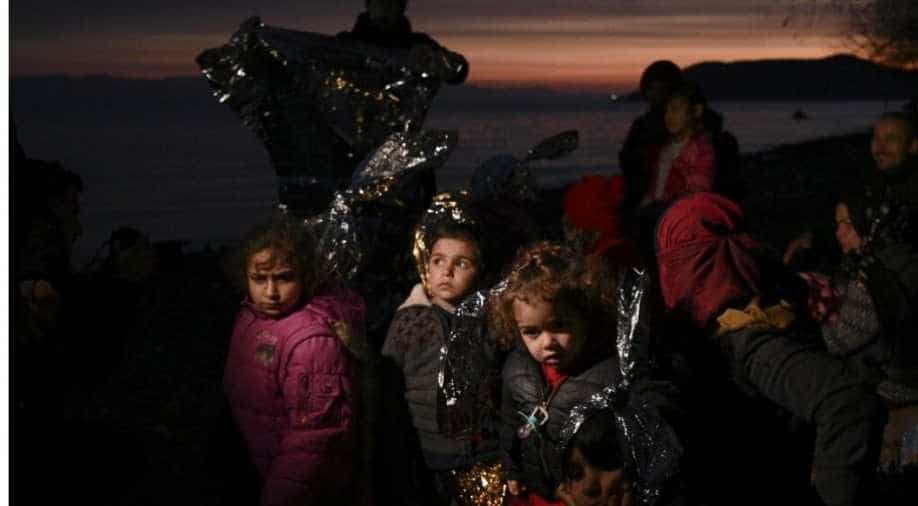 Migrant children wait near Skala Sykamineas on the Greek Lesbos island after crossing the Aegean sea between Turkey and Greece. Photograph:( AFP )

A massive influx of migrants swelled along the border over the weekend after Turkey's President Recep Tayyip Erdogan threatened to open its frontier to Europe.

Greece has blocked nearly 10,000 migrants trying to enter from the Turkey border over the past 24 hours, a Greek government source said Sunday.

A massive influx of migrants swelled along the border over the weekend after Turkey's President Recep Tayyip Erdogan threatened to open its frontier to Europe.

He is seeking to pressure EU governments over the Syrian conflict after an airstrike in Syria's Idlib province on Thursday killed dozens of Turkish soldiers.

Huge crowds tried to cross into Greece via the Kastanies Forest in the early hours of Sunday, the source said.

Greek authorities said 73 migrants had been arrested, but added that they "weren't from Idlib, but from Afghanistan, Pakistan, Somalia".

Some 13,000 migrants have gathered along the Turkish-Greek border, including families with young children, the International Organization for Migration said Saturday.

Greek security forces are patrolling the Evros river shores -- a common crossing point -- and have issued loudspeaker warnings not to enter Greek territory.

On Saturday clashes erupted along the border, where Greek police fired tear gas at migrants who in turn lobbed rocks at officers.

Erdogan threatened to open Turkey's gates for some of the 3.6 million refugees it is harbouring as a way to pressure EU countries over the conflict in Syria.

Turkey and Russia, who back opposing forces in the conflict, have held talks to defuse tensions after the air strike left 34 Turkish troops dead, sparking fears of a broader war and a new migration crisis for Europe.

The UN says nearly a million people -- half of them children -- have been displaced by the fighting in northwest Syria since December, forced to flee in the bitter cold.

In 2015, Greece became the main EU entry point for one million migrants, most of them refugees fleeing the Syrian civil war.

EU Commission chief Ursula von der Leyen expressed "concern" on the unimpeded flow of migrants from Turkey to the bloc's external borders in Greece and Bulgaria.

"Our top priority at this stage is to ensure that Greece and Bulgaria have our full support," she tweeted Saturday.