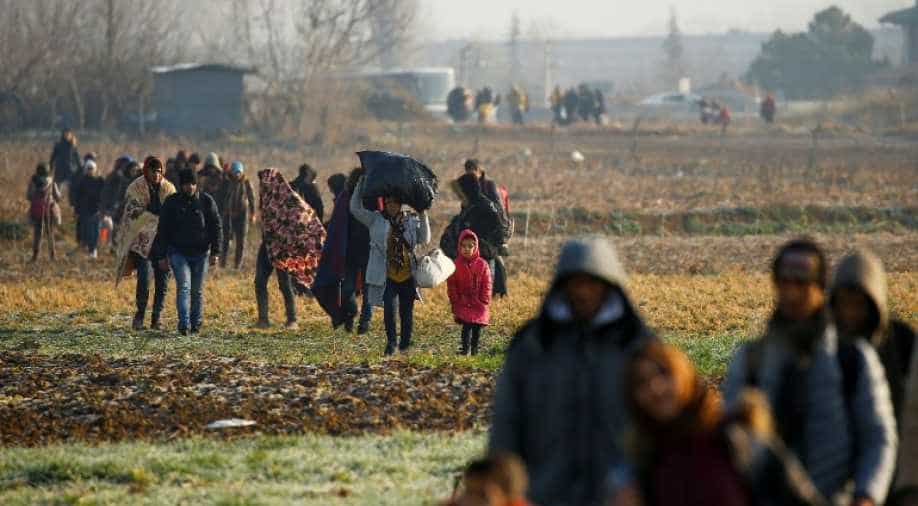 Migrants trickled through permeable borders to Greece from Turkey on Sunday as thousands gathered on the country's frontier seeking entry after Ankara relaxed curbs on their movement.

Migrants trickled through permeable borders to Greece from Turkey on Sunday as thousands gathered on the country's frontier seeking entry after Ankara relaxed curbs on their movement.

At first light, dozens of people in three dinghies made their way to the Aegean island of Lesbos, a Reuters witness said. Further north, groups waded across a river at Kastanies on the shared border.

There was tension at Kastanies on Saturday after riot police used teargas to repel hundreds of migrants on the Turkish side demanding access to Greece.

Turkey has said it will no longer restrain hundreds of thousands of migrants on its territory from reaching Europe, triggering an almost instant rush to the borders it shares with European Union member Greece.

"Yesterday there were 9,600 attempts to violate our borders, and all were dealt with successfully," deputy defence minister Alkiviadis Stefanis told Greece's Skai TV.

The International Organization for Migration put the number of people along the Greek-Turkish border at 13,000. By late Saturday, buses in Turkish cities were still being loaded with people bound for the border area, it said.

Greece has said there was an orchestrated attempt on its borders and has accused Turkey of actively guiding migrants.

"Not only are they not stopping them, but they are helping them," Stefanis told Skai.

Greece was a gateway for hundreds of thousands of asylum seekers into Europe in 2015 and 2016. There are already more than 40,000 migrants on the Aegean islands, living in severely overcrowded camps and filthy conditions.

Last week, clashes broke out on Lesbos between riot police and locals to create closed detention centres to move the existing migrant population. Locals say the islands are suffering a disproportionate burden.

The European Union said it was supporting Greece.