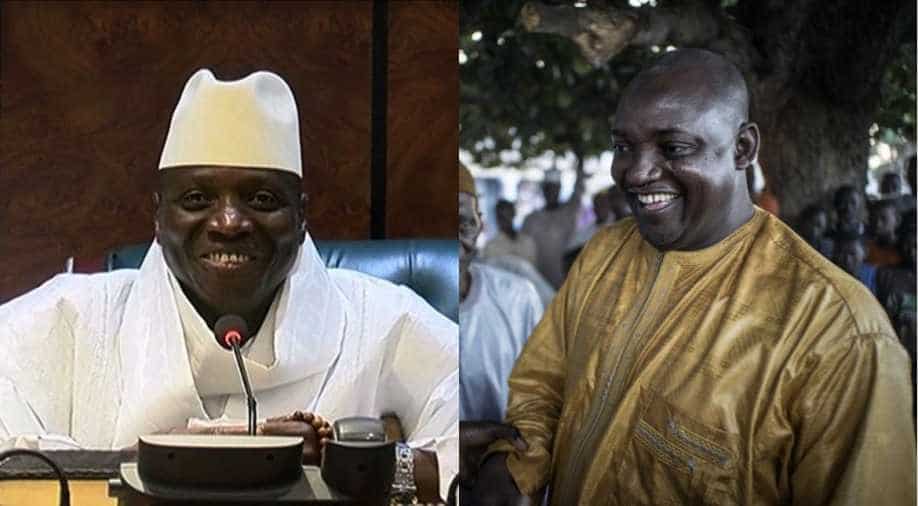 Jammeh claimed 'investigations' had revealed that numerous voters had not been able to cast their ballots. In photo: Yahya Jammeh (L) and president-elect Barrow (R). Photograph:( AFP )

Gambia's President Yahya Jammeh said on Friday he would not recognise the results of December 1 elections and called for fresh polls, a week after he conceded defeat.

"In the same way that I accepted the results faithfully believing that the Independent Electoral Commission was independent and honest and reliable, I hereby reject the results in totality," he said in a statement broadcast on state television.

"Let me repeat: I will not accept the results based on what has happened," he said, condemning "unacceptable errors" on the part of electoral authorities and calling for a new vote.

Jammeh pointed to an accounting error, identified by the IEC, which awarded victory to his opponent Adama Barrow but with a slimmer margin than initially announced.

Latest official figures gave Barrow 43.29 per cent of the votes in the presidential election, while Jammeh took 39.64 percent. The turnout was at 59 percent.

Jammeh claimed "investigations" had revealed that numerous voters had not been able to cast their ballots.

"This is the most dubious election we ever had in the history of this country," he said.

"We will go back to the polls because I want to make sure every Gambian votes under an electoral commission that is impartial, independent, neutral and free from foreign influence," he said, adding that he would not tolerate any street protests over his decision.

The announcement upends the situation in the west African nation, where the population had been hoping for a peaceful democratic transition after Barrow's shock victory this month looked set to end Jammeh's 22 years in power.

On December 2, Jammeh made a magnanimous concession speech on television and promised -- to general shock and surprise -- a peaceful and swift handover of power to President-elect Barrow.

On Thursday, Barrow vowed to set up a South Africa-style truth commission and said that the country's chief of defence staff had called to pledge the military's backing.

But pressure to prosecute Jammeh and top figures in his administration, who have been accused of widespread human rights violations, is one of the key challenges facing the new government.

In an interview with French media December 3, Barrow ruled out a "witch hunt" and said that his predecessor would be able to "live in Gambia like any ordinary citizen".

Dozens of opposition activists who had been detained since April for holding protests were granted bail this week, with the lawyer noting they were members of the United Democratic Party (UDP), of which Barrow was the presidential candidate.

UDP founder and leader Ousainou Darboe, who was jailed in July for taking part in a protest, was freed on bail with 18 others on Monday, as part of their ongoing appeal against three-year sentences.