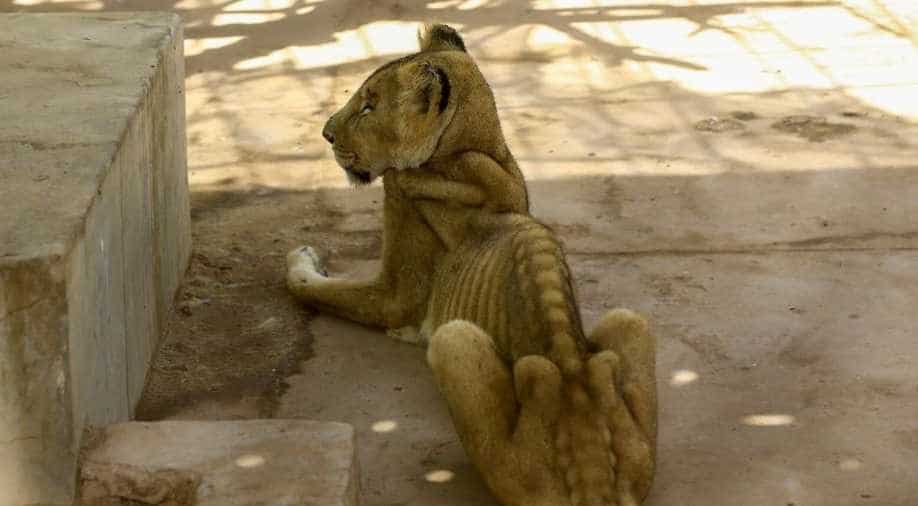 A malnourished lioness sits in her cage at the Al-Qureshi park in the Sudanese capital Khartoum. Photograph:(AFP)
Follow Us

Months of political and economic turmoil that rocked Sudan from late 2018 severely damaged the health of the lions faced with shortages of food and medicine.

A team of international wildlife conservationists flew in Monday to examine four starving and sick lions at a zoo in the Sudanese capital where a lioness died last week.

Months of political and economic turmoil that rocked Sudan from late 2018 severely damaged the health of the lions faced with shortages of food and medicine.

The five-member rapid response team from Four Paws was conducting tests on the lions at Al-Qurashi park zoo where the animals have been held for years, an AFP correspondent reported.

Also read: After attacks on people and livestock, Tanzania to relocate 36 Serengeti lions

A lioness died of dehydration and lack of food despite having received intravenous fluids after the launch of an online appeal for veterinary help.

The animals lost as much as two-thirds of their body weight after going unfed for weeks as Sudan's chronic cash shortage hit donations.

"It's now important to improve the conditions of the animals... and the next step is to find a long-term solution," Amir Khalil of Four Paws told AFP.

Khalil said carrying out tests on the animals would not be easy. "It's very difficult to approach the animals and very risky," he said.

Also read: In 44 years, humans have wiped out 60% of the world's animal population: WWF

"The animals are very weak at this moment, so moving them won't be the best thing," said Juno Van Zon, another member of the team.

"I think for now we have to focus on getting the animals healthy and also to train the people."

Al-Qureshi Park is run by Khartoum municipality but funded partly by private donations, which have dried up due to the economic crisis that sparked nationwide protests though much of last year.

An online campaign has been launched under the hashtag #Sudananimalrescue to help save the lions.

It is not known how many lions survive in the wild in Sudan, but a population lives in Dinder National Park on the border with Ethiopia.

African lions are classified as a "vulnerable" species by the International Union for Conservation of Nature.