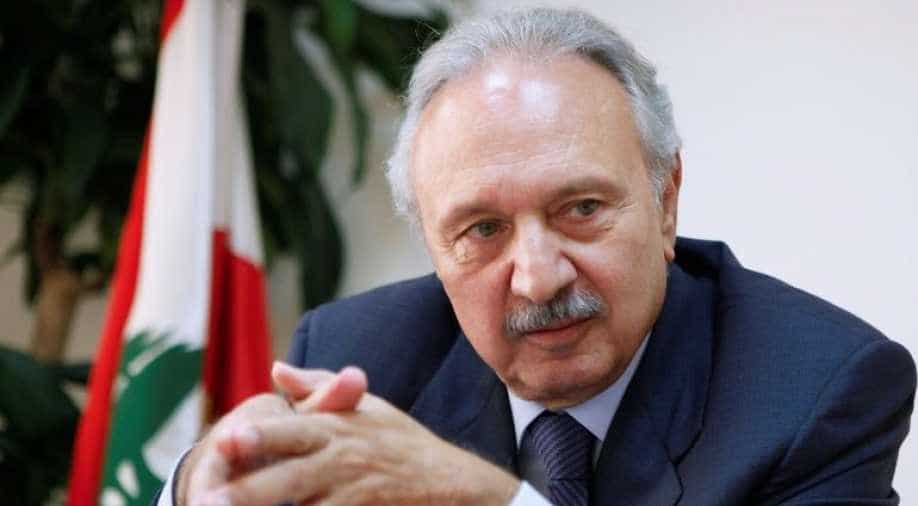 The consensus on the wealthy 75-year-old suggests progress towards forming a new government at a time of acute economic crisis and street protests that brought down his predecessor.

Mohammad Safadi, a former finance minister, has agreed to be Lebanon's prime minister if he wins the support of leading parties, Foreign Minister Gebran Bassil said on Friday.

The consensus on the wealthy 75-year-old, who has had extensive business ties to Saudi Arabia, suggests progress towards forming a new government at a time of acute economic crisis and street protests that brought down his predecessor.

Bassil told broadcaster MTV the process to name Safadi as prime minister should begin on Monday and a new government was likely to be formed quickly as all the main parties agreed on the need to move swiftly.

"I confirm that we have been in contact with minister Safadi and he has agreed to take on the position of prime minister if his name gets an agreement with the main political forces in government," said Bassil.

Saad al-Hariri quit as prime minister on October 29 in the face of the protests against ruling politicians who are blamed for rampant state corruption and steering Lebanon into its worst economic crisis since the 1975-90 civil war.

Banks have been closed this week because of a strike by staff over security concerns, banks have imposed controls on transfers abroad and US dollar withdrawals, and the pegged Lebanese pound is under pressure on an informal market. Some shops have increased prices of imported goods in pounds.

Political sources said the consensus on Safadi emerged in a meeting late on Thursday between Hariri, a Sunni politician aligned with Western and Gulf states, and representatives of the Iran-backed Shi'ite group Hezbollah and its Shi'ite ally Amal.

A source familiar with details of the meeting said Hariri had expressed no objections to Safadi's nomination.

A second source, a senior figure close to Amal and Hezbollah, said agreement in principle on Safadi's nomination had emerged at the meeting.

Safadi, is a prominent businessman and former member of parliament from the predominantly Sunni city of Tripoli. He was finance minister from 2011 to 2014 under Prime Minister Najib Mikati, and was also previously minister of economy and trade.

Lebanon's prime minister must be a Sunni Muslim, according to its sectarian power-sharing system.

The next government will face huge challenges.

It must win international financial support seen as critical to alleviating the economic crisis, while addressing the challenge posed by the nationwide protest movement that wants to see the old elite gone from power.

Lebanon's long-brewing economic crisis, rooted in years of state waste, corruption and mismanagement, has deepened since the protests began.

Dollars were being offered at 1,820 pounds on Friday, an exchange dealer said, weaker than the official rate of 1,507.5 pounds but slightly firmer than a day earlier.

Hariri had said he would return only as prime minister of a cabinet of specialist ministers that he believed would be best placed to win aid and save Lebanon from crisis. To that end, he has been holding many closed-door meetings with other parties.

Hezbollah and Amal wanted Hariri to return as premier, but the Shi'ite groups and President Michel Aoun, a Hezbollah ally, have demanded the inclusion of both technocrats and politicians in the cabinet.

Listed as a terrorist group by the United States, the heavily armed Hezbollah and groups politically aligned with it hold a majority of seats in parliament.

The process requires Aoun, a Maronite Christian, to formally consult members of parliament on their choice for prime minister. He must designate whoever gets the most votes.