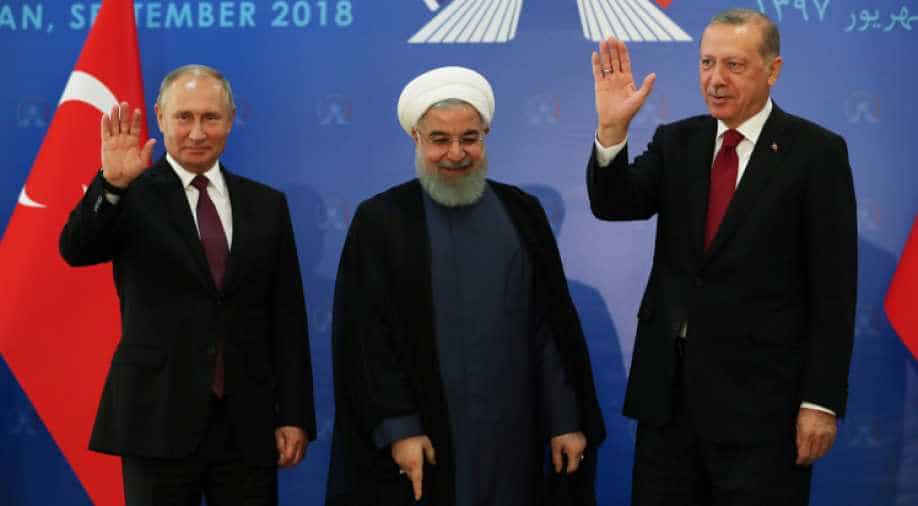 Presidents Vladimir Putin and Hassan Rouhani will join Erdogan in the Turkish capital Ankara for their fifth summit on the conflict since 2017.

Turkish President Recep Tayyip Erdogan will host his Russian and Iranian counterparts on Monday for their latest summit on Syria, with attention focused on Damascus's push on the last rebel-held bastion of Idlib.

Presidents Vladimir Putin and Hassan Rouhani will join Erdogan in the Turkish capital Ankara for their fifth summit on the conflict since 2017.

Iran and Russia have been staunch supporters of Syrian President Bashar al-Assad, while Turkey has called for his ouster and backed opposition fighters.

But with Assad's position looking increasingly secure, Turkey's priority has shifted to preventing a mass influx of refugees from Idlib in Syria's northwest.

Turkey is concerned by the steady advance of Syrian forces into the region, backed by Russian airpower, despite a series of ceasefires.

Turkey has 12 observation posts in Idlib to enforce a buffer zone agreement struck a year ago with Russia to prevent a full-scale Syrian offensive.

But the posts look increasingly threatened, with one of them cut off from the rest of Idlib when Syrian forces advanced last month.

Russian air strikes have continued in the region despite the latest ceasefire between Ankara and Moscow on August 31.

"A large number of terrorists are still present in this zone... and fighters continue to fire on the positions of government forces," Kremlin advisor Yuri Ushakov said on Friday.

The Turkish presidency said the leaders would discuss the latest developments in Syria as well as "ensuring the necessary conditions for the voluntary return of refugees and discussing the joint step to be taken in the period ahead with the aim of achieving a lasting political solution."

Moscow is keen to see progress on establishing a constitutional committee to oversee the next stage of the political settlement in Syria.

That would give Putin a political win to add to its military victories, said Dareen Khalifa, senior Syria analyst at International Crisis Group. But she said expectations should remain low.

Even if they could agree on who will form the committee, "this leaves a crux of issues unaddressed for the future of the political process including the regime's ability and willingness to undertake any kind of political reform," Khalifa told.

All three leaders are expected to hold one-on-one meetings before the summit, the Kremlin said.

They will also hold a closing news conference with a view to presenting a joint declaration. Meanwhile, Turkey has other concerns regarding Syria.

It has repeatedly threatened to launch a cross-border offensive against Syrian Kurdish forces, whom it sees as allied to Kurdish militants in its own territory.

That has strained Turkey's relations with its NATO ally, the United States, which backs the Syrian Kurds as the main fighting force against the Islamic State group (IS).

The US has vowed to work with Turkey to clear Kurdish forces away from its border, but Ankara says progress has so far been "cosmetic" and it could launch an operation into Syria by the end of this month.

Turkey has conducted two previous offensives against IS in 2016 and the Kurdish People's Protection Units (YPG) militia in 2018.