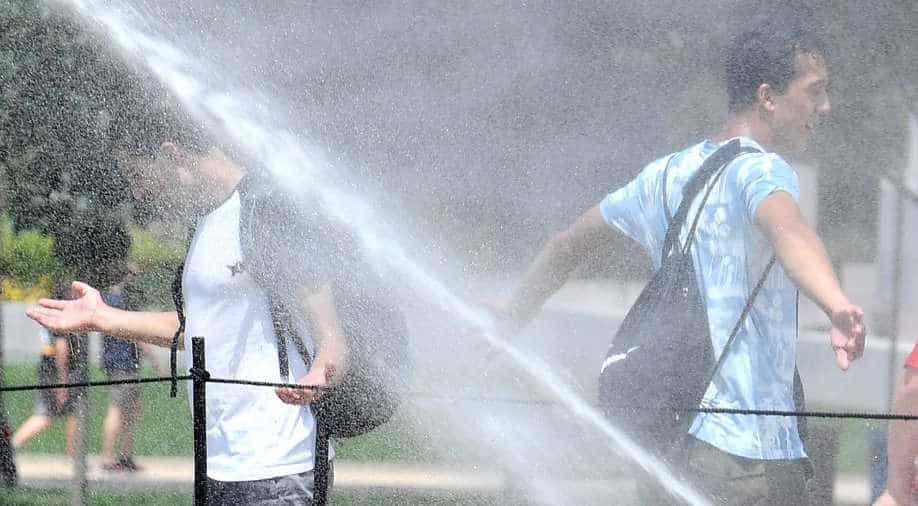 An oppressive heatwave stretching from the Midwestern plains to the Atlantic coast had nearly 150 million people struggling to stay cool in stifling heat that set records in a handful of states.

The United States sweltered in dangerously hot weather on Sunday, with major cities including New York, Philadelphia and Washington broiling in temperatures that rose into triple digits.

An oppressive heatwave stretching from the Midwestern plains to the Atlantic coast had nearly 150 million people struggling to stay cool in stifling heat that set records in a handful of states.

By Sunday afternoon, the National Weather Service (NWS) said the high temperatures would soon be over, but the severe weather would continue.

"The dangerous heat wave which enveloped much of the Midwest to the East Coast this weekend should finally break by Monday as a cold front drops southward," the agency said.

However, it warned that "showers and thunderstorms... with heavy to excessive rainfall and severe weather possible" were expected across a swath of the east coast, and flash floods were a risk.

Around 95 million people were under a heat warning or advisory for Sunday, down from Saturday's 157 million.

Earlier in the day, the NWS said "numerous stations" stretching from Massachusetts in the north to North Carolina in the south "were reporting heat index values between 100-110" degrees, with the highest values found in the southeast of the state of Virginia.

Authorities urged people on Sunday to stay hydrated, watch out for the sick and elderly, stay inside as much as possible and not leave children or animals in cars.

"We're almost near the end of the heat emergency. Temperatures will start to go back down tonight," New York Mayor Bill de Blasio tweeted, asking the city's residents to "keep hydrated and keep cool."

The NWS said it had recorded all-time high temperatures on Saturday in seven places in the US including Manchester, New Hampshire, Atlantic City, New Jersey and New York's JFK airport.

US media has blamed the heatwave for at least six deaths, including a hiker who had been found unconscious on a trail outside Washington on Saturday and two people who died earlier in the week in the eastern state of Maryland.

The New York City Triathlon, which had been scheduled for Sunday, was cancelled for the first time since its founding in 2001.

Life Time, which produces the race, donated more than 12 tons of water and Gatorade Endurance drink meant for competitors to be distributed to New Yorkers in need, CBS reported.

Meanwhile, the two-day OZY Fest a food, comedy and music festival set for Central Park was also called off.

In Washington, a popular weekly outdoor summer jazz concert at the National Gallery of Art Sculpture Garden was cancelled.

"Sunday has been cancelled. Stay indoors, nothing to see here. We got this," The New York City Police Department wrote on Twitter.

The city had opened 500 cooling centres for residents.

At least three public defenders said on Twitter that inmates in New York's notorious Rikers Island jail complex were suffering from no air conditioning and that some guards had turned off fans as punishment, resulting in "deadly conditions."

Top officials from the city's Department of Corrections were at the facility monitoring the response to the heatwave to "protect health and safety of everyone in the facility," de Blasio wrote on Twitter.

The department said in a statement to AFP that extra staff were on hand to distribute summer clothing, and clinics were open around the clock to treat heat-related symptoms.

Those in units without air conditioning were given access to fans, ice, water and "multiple cool showers."

Earlier in the week, the National Weather Service office in the Midwestern city of Omaha baked a tray of biscuits savoury breakfast bread similar to scones on the dashboard of a parked car.

After nearly eight hours and with temperatures in the pan reaching 185 degrees, the pastries were almost fully cooked.

Climate data showed June was the hottest month on record worldwide, with a heatwave across Europe smashing national records.